Posted to Its fair weather for foreign classification societies (byJoseph Fonseca) on June 30, 2010

Though Indian Register of Shipping (IRS) has stormed on to the maritime field with full fledged membership of International Association of Classification Societies Council (IACS) last week, foreign classification societies operating in India do not foresee any paradigm shift in their operations. In fact some find the future bright considering the growth that India is experiencing.
ClassNK which celebrated their 110 anniversary a couple of years ago provided strong support to IRS to help them gain their IACS full membership. They feel IRS could catch up with most of their rivals but it would take time. They feel that with their limited international presence IRS will still have to depend on other IACS members.
“Dual classification model will continue for some more time,” asserts A.V. Pradhan, General Manager, Nippon Kaiji Kyokai viz ClassNK. “There will be a lot more tonnage coming in but IRS being a younger society it will have to measure up to the long experience of other IACS members who have been operating in India. ClassNK has been in the field for almost 125 years. Whenever surveys are to be conducted overseas where the IRS does not have an office they call on other members including us to do the needful. This will continue. However, IRS will have an edge in certain fields now that they have become main members.”
Sanjeev Panicker, Business Development Manager (India) pointed out that business of foreign societies will hardly get affected except those who are interested in restricting to only classing ships. He said, “When ships are put up for sale preference is shown by buyers for those ships classed by IACS member. Vessels classed by IACS members fetch more than those classed by non members. This would definitely continue to be carried out by IRS more intensely now that they have acquired full membership.”
While welcoming IRS into their fold most officials from ABS and DNV contend that the relation between IRS and other IACS members operating in India would continue since overseas members are well established worldwide. A DNV spokesman (not wanting to be named) claimed, “One should not forget that Indian ships sail world wide and we have a large number of offices from where we can render service to IRS.”
A ship owner informed, “The Director General of Shipping (DGS) has entrusted most of the statutory surveys to various classification societies as the administration is very short-staffed and hardly able to meet the demand. Besides, the Indian tonnage is growing. It is also difficult for officials of the administration to travel overseas at short notice because they are shackled to lengthy procedures and government permissions. ”
A spokesperson for the Indian National Shipowners’ Association (INSA) felt that although IRS has now become a full member of IACS and having all the opportunity to grow yet it has a long way to go. He said “A few months back IRS in a bid to corner the entire survey work of Indian vessels had prevailed upon the Director General of Shipping (DGS) to entrust them with all the work including what has been given to the foreign societies. The DGS had accordingly issued a notification to that effect. But INSA opposed this, pointing out that IRS did not have worldwide infrastructure and accordingly the notification was withdrawn by the DGS at the behest of INSA.”

Darwin Sets Sail: Survival of the Fittest for Ocean Shipping 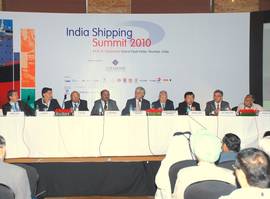