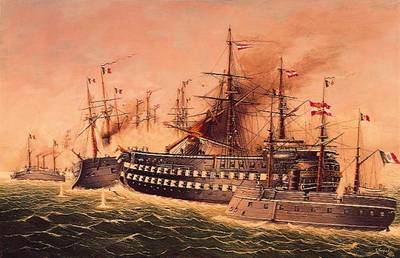 In June 1866, the newly unified nation of Italy saw an opportunity to recover Venice and the surrounding region from the Austrian Empire, which had acquired the region in 1797 as a gift from Napoleon.  A few weeks earlier, Prussia had attacked Austria.  Italy calculated that Austria was diverting its resources and attention to the north, and that Austria’s southern flank would be weakened.  A fleet commanded by Count Carlo di Persano, a member of the Italian Senate, was dispatched from Ancona to attack and seize control of the island of Lissa (now called Viz, Croatia) on the Dalmatian coast.  The Italian fleet arrived off Lissa on 18 July 1866 and commenced shelling the fort there.  On 20 July, Count Persano was notified of the imminent arrival of the Austrian fleet.  He broke off the planned landings and steamed north to meet the enemy.  The Italian fleet consisted of twelve ironclads, ten cruisers, and four gunboats.  The smaller Austrian fleet consisted of seven ironclads, one steam two-decker, six cruisers, and twelve gunboats.  The guns on the Italian warships were more modern, threw heavier shells, and had longer ranges.  The Austrian fleet, though, was better trained and more aggressive.  Count Persano arranged his fleet in a single line, similar to that using in days of a sailing navy.  Admiral Tegetthoff, commanding the Austrian fleet, arranged his ships in three wedge formations.  Shortly before the engagement commenced, Count Persano decided to shift his flag from Re d’Italia to Affondatore.  This was done without properly notifying the other ships in the fleet.  Thus, when the battle commenced, commanding officers were looking to the wrong ship for flag signal orders.  Vessels of the Austrian fleet were painted black, while of the Italian fleet were painted gray.  Knowing that his vessels could be out-gunned, Admiral Tegetthoff ordered his commanders to ram anything painted gray.  The Austrian fleet broke through the Italian line, turned, and rammed available Italian warships.  When the smoke cleared, the Italian fleet had lost two ironclads.  The Austrian steam two-decker suffered severe damage, but no Austrian warship had been sunk.  Count Persano was condemned by the Italian Senate for incompetence and stripped of his rank.  Admiral Tegetthoff was hailed as an Austrian national hero.  The battle, though, had no strategic importance.  Austria ultimately lost its war with Prussia (and Prussia’s Italian ally) and, among other things, was forced to cede Venice to Italy.