Three islets off the Moroccan coast, administered by Spain 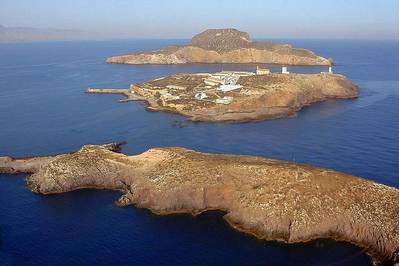 The Chafarinas Islands, referred to by Morocco as the Zafarin Islands, are three small rocky islets governed by Spain through its enclave of Melilla, located in the Mediterranean Sea two miles off the Moroccan town of Ras Kebdana.  The islands have a total area of 0.2 square miles (128 acres).  The islands have no regular inhabitants, but a 190-man Spanish Civil Guard garrison is stationed on the largest of the three, Isla Isabell II.  An automated lighthouse is also located on the island.  The islands have no source of fresh water.  The garrison is resupplied from Melilla, located about 25 nautical miles to the west.  The islands have been occupied by Spain since 1847.  They provide the best anchorage along the Mediterranean coast of Morocco.  Recent archeological evidence indicates that humans resided on the islands as early as the Neolithic period (12,000 to 6,000 years ago).  The islands and the waters surrounding them are home to a number of less common life forms, including Audouin’s gulls, yellow-legged gulls, horseshoe worms, black coral, and the invasive crab Percnon gibbesi.  Nine out of the eleven marine invertebrates ranked as endangered can be found in these waters and the world’s second largest colony (2,000 pairs) of the endangered Audouin’s gull nest on the islands, largely undisturbed.  The islands are part of the Spanish National Park system, and travel to them is strictly limited to garrison support and scientific research.  That has not prevented illegal immigrants and drug smugglers from occasionally showing up on the islands.  When detected, they are detained and turned over to Moroccan authorities.  Morocco strongly disputes the Spanish claim to the islands.