Malaysia’s top carrier has decided to exit the container shipping business altogether, tired of having its profitability dragging on the ocean floor.

Some pundits are predicting significant consolidation of the container shipping industry as it is hit from all sides by falling demand and burdened with over capacity and high fuel prices.

Among the top carriers, it is hard to see where that consolidation will come from and who would even be interested. Maersk buying P&O was the last major merger and it took years to digest the acquisition.

However, an Asian carrier has made the first move. It won't be consolidation, but it will be a dramatic exit from the market nonetheless. Malaysian carrier MISC announced that it would pull out of the container shipping business by the middle of next year.

It may have come as a surprise, but shouldn’t have, really. The results from its container division have been dragging the company down like it forgot to raise its anchor. The last three years have seen MISC racking up losses in the box sector totaling US$790 million.

MISC told its investors that the container shipping industry was plagued by over capacity and operators were struggling to be profitable in such a depressed freight rate environment. Liftings are down, bunker fuel is more expensive.

Throwing its hands up, the Malaysian carrier decided to head for the exits. So certain is MISC that the decision is the right one that the line is prepared to absorb the US$400 million hit that the move out of containers will cost. There are trade alliances to pull out of with early termination of service and operational contracts.

This will decimate its 2011 earnings (year end Dec) but the company believes it will be a wise move long term.

MISC has 16 container ships in its fleet and 14 chartered in. By contrast, the carrier is the world’s largest operator of LNG vessels with 29 in the fleet. It also has a giant fleet of petroleum tankers with 53 on the books, 30 chartered in and 11 on order. In addition to the gas and petrol carriers, MISC has 19 chemical tankers in house, nine chartered in and two on order.

Scary stuff from the experts, but 'wait and see' is the best advice

Delving into Beat The Canal leaders 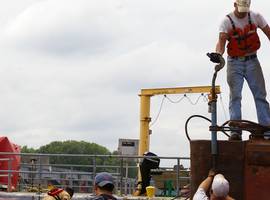