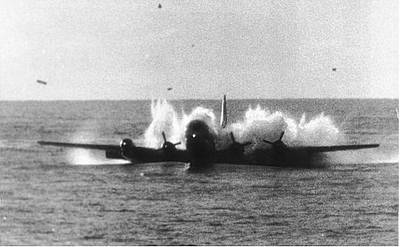 The United States Coast Guard Cutter (USCGC) Pontchartrain (WPG-70) was at Ocean Station November midway between California and Hawaii in October 1956.  This was a routine and generally boring assignment consisting mostly of recording weather conditions and reporting those reading back to shore.  A secondary task was to standby and render aid in the event of a marine casualty in the vicinity.  The 255-foot long Owasco Class cutter had been launched in July 1945, missing the opportunity to see action during World War II.  In late 1949, Pontchartrain was transferred from Norfolk, Virginia to Long Beach, California.  From there, it rotated with other Coast Guard cutters on Pacific weather stations and various law enforcement patrols.  October 1956 was its turn to serve at Ocean Station November.  Meanwhile, Pan American World Airways Flight 6 was making a scheduled around-the-world passenger flight.  The final leg of the Boeing Model 377 Stratocruiser’s flight was from Honolulu to San Francisco.  It departed Honolulu at 8:24 p.m. on 15 October for the scheduled 8 hour, 54 minute flight, carrying 24 passengers and a crew of seven.  Midway through the flight, the propeller on the number one engine (the outside engine on the left wing) suffered a prop governor failure and began to overspeed.  After some effort by the pilot, the engine was stopped.  The remaining engines had to be run at high power to keep the aircraft at altitude.  This caused the number four engine to fail – the aircraft started to slowly descend.  The pilot notified Pontchartrain that it would have to ditch.  Commander William Earle, USCG, Pontchartrain’s commanding officer, provided the pilot with the weather conditions and advised on the best heading for ditching.  The cutter laid a trail of foam to mark the course.  The ditching was delayed as long as possible in order to burn excess fuel and to avoid ditching in darkness.  At 6:15 a.m. local time on 16 October 1956, the Stratocruiser ditched at an airspeed of approximately 90 knots.  The left wing hit a swell, spinning the aircraft to the left.  The tail broke off and the plane began to settle in the water.  Everyone on board had prepared for the ditching, so injuries were minor.  The cabin door opened and the passengers and crew were met by Coast Guardsmen in boats from the Pontchartrain.  Everyone was quickly evacuated.  The next to the last person off was the purser.  The last person off was the pilot.  At 6:35, twenty minutes after the ditching, the aircraft sank into the sea.  Crew members on the cutter had photographed the ditching and rescue.  One crew member had a home movie camera and captured much of the action.  The incident was front-page news worldwide.