A historic and cultural center of Malaysia, located on a strategic strait 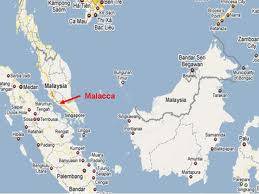 The Strait of Malacca is named after Malacca, now part of Malaysia.  In about the year 1400, Parameswana, the last Raja of Singapura, was expelled from the area around present-day Singapore by local rivals.  He relocated to the fishing village of Malacca, which had a fine port and was located at the narrowest point of the strait between the Malay Peninsula and the island of Sumatra.  The new sultanate thrived as an international trading port in a strategic location, serving as a logistics base of the Chinese eunuch Admiral Zheng He during his fleets’ voyages to India, Arabia, and Africa between 1405 and 1433.  On 24 August 1511, a Portuguese fleet from Goa under the command of Alfonso de Albuquerque conquered Malacca, disrupting the established trading routes.  With the assistance of the Sultan of Johore, a Dutch expedition expelled the Portuguese from Malacca in 1641, making it a regional trading center reporting to the main factory in Batavia.  In 1824, the British traded their small colony at Bencoolen on Sumatra for the Dutch colony of Malacca.  Malacca was later merged into the Straits Settlements.  When this Crown Colony was disestablished, it became part of the Malayan Union, which became the Federation of Malaya, and now Malaysia.  The State of Malacca covers approximately 640 square miles.   Its capital is Malacca City.  The historic center of Malacca has been designated a World Heritage Site.  Fort A Famosa (of which only the gatehouse remains) is one of the oldest European structures in Asia.  Construction of the fort was started by the Portuguese shortly after their arrival in 1511.  The fort was heavily damaged during the Dutch invasion in 1641.  St. John’s Fort was originally built by the Portuguese, but largely reconstructed by the Dutch.  Its cannon point inland, because that is where the greatest military threat existed at the time.  St. Peter’s Church, the oldest Catholic church in Malaysia, was built in 1710.  A sizable group of residents of Portuguese descent live in Malacca and practice many Portuguese traditions.