"Near-miss : A sequence of events and/or conditions that could have resulted in loss. This loss was prevented only by a fortuitous break in the chain of events and/or conditions. The potential loss could have been human injury, environmental damage or negative business impact (e.g., repair or replacement costs, scheduling delays, contract violations, loss of reputation)." - International Maritime Organization 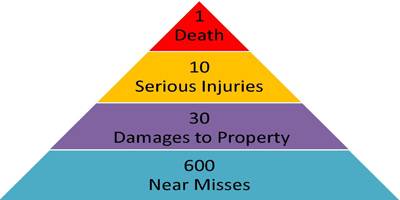 "Near-miss : A sequence of events and/or conditions that could have resulted in loss.  This loss was prevented only by a fortuitous break in the chain of events and/or conditions.  The potential loss could have been human injury, environmental damage or negative business impact (e.g., repair or replacement costs, scheduling delays, contract violations, loss of reputation)." - International Maritime Organization

Near-miss reporting and investigating is something that mariners have been doing for many years now.  Initially, many viewed them as a passing fad - the latest gimmick rolled out by the newest consultant.  Unfortunately, the rationale behind near-miss reporting and investigation wasn't and probably hasn't been explained to many.  That's an opportunity that was certainly lost, as this is all much more than a passing fad or gimmick.

Whether it is the data gathered by Frank E. Bird, Jr. in 1969 or the more recent studies conducted by Conoco-Phillips Marine in 2003, there's solid evidence that looking at and understanding the root causes of near-misses will reduce injuries and fatalities.  Why?  Because we've caught the situation before it produced that injury or damage and now, we have the opportunity to learn.  It doesn't matter if it was equipment failure, personnel error or an inadequate procedure, something has been identified as a problem.  Once that root cause is identified, those lessons learned can be used to prevent further incidents of the same sort: future incidents that might not be caught and might lead to equipment damage, human injury or fatality

"The safety management system should include procedures ensuring that non-conformities, accidents and hazardous situations are reported to the Company, investigated and analysed with the objective of improving safety and pollution prevention." - ISM Code 9.1

So, there is a system whereby a vessel is creating a library of near-misses and lessons learned.  But, wouldn't it be something if those near-misses and lessons learned were shared across a fleet or a whole company?  Does someone within your company compile a newsletter that contains some lessons learned?  Very frequently, there will be similar near-misses from many vessels which could indicate a systemic problem.  Sometimes it is a slew of trips, slips and falls or possibly equipment that fails, such as gratings or handrails that leads to near-miss observations.  If so, a concentrated safety campaign in that area might be warranted.  At a minimum, if this information is passed around, other vessels get the opportunity to learn from the mistakes or observations of others.  Designated Persons Ashore (DPA), safety departments or loss prevention groups’ buy-in would be crucial to making this happen on a company-wide basis.

Going to the next level, what would happen if these near-misses were passed around the whole industry?  Wouldn't it be great to stop a problem onboard your vessel before it became an issue by hearing about lessons learned from another company or possibly, another segment of the maritime industry entirely?  Oddly enough, there are already some systems set up for doing just that.  One of the most notable is the Nautical Institute's Mariners' Alerting and Reporting Scheme (MARS).  Drawing near-misses from across a wide swath of the maritime industry, their database goes back over 20 years.  That's no small amount of lessons learned!  In the UK, there is CHIRP, which gathers near-misses from both the aviation and maritime industries.  The Confidential Hazardous Incident Reporting Programme (CHIRP) compiles near-misses received into a quarterly report which is quite interesting to read.  Not only do they report on information received, but they follow-up on it to see what best practices companies might have implemented in response to the near-miss.

CHIRP is definitely European-centric, whereas MARS is more international.  On the U.S. side of the Atlantic, the U.S. Coast Guard publishes lessons learned under their Incident Reports.  These lessons learned come more from inspection observations and incident investigations, rather than from within the maritime industry itself.  Perhaps, the U.S. Maritime Administration should establish its own database of near-misses - all the better for passing along lessons learned and making the industry - and mariners! - safer.

Does it take effort to pass along near-misses, especially outside the company?  Absolutely it does!  But, remember how onerous it seemed to fill out those near-misses onboard your vessel a few years ago?  And now, it's just how you do business.   Perhaps, in a few more years, it might be just as natural to send a report into one of the national or international databases.  In the meantime, mariners, DPAs and companies should continue to look at lessons learned inside and outside their organizations to ensure best practices are used and mariners are safe!
Additional Reading and Links
IMO MSC /Circ. 1015 "Reporting Near Misses"
IMO MSC-MEPC.7/Circ.7 "Guidance on Near-Miss Reporting"
U.S. Coast Guard Investigations - Investigations
MARS (Mariners' Alerting and Reporting Scheme)
CHIRP for Maritime (Confidential Hazardous Incident Reporting Programme)
Graphic courtesy of British Columbia Public Service
Captain Richard Madden is an actively sailing mariner with over 20 years of industry experience. He is focused on safe and secure operations throughout the maritime industry. Most recently, Captain Madden has gained extensive experience while operating in the Horn of Africa region on container vessels in the feeder trade. All opinions expressed within this article are his and his alone.