Posted to Brazilian Subsea and Maritime News (byClaudio Paschoa) on May 27, 2010

The new discovery in the Caratinga field along with the possible confirmation of of the extension to the Barracuda field, raise expectations for the existence of an extensive pre-salt system in the Campos Basin. 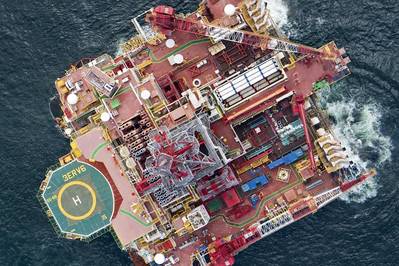 Petrobras has announced the discovery of two new light oil accumulations (29o API) in reservoirs in the Campos Basin's post- and pre-salt areas. The discovery was made by means of the drilling of well 6-CRT-43-RJS, known as Carimbé, located in Caratinga Field, about 106 km off the coast of Rio de Janeiro, at a water depth of 1,027 meters.
The accumulation discovered in the post-salt reservoirs is nestled 3,950 meters under the seabed. The recoverable volumes are estimated at about 105 million barrels of oil equivalent there.
The other accumulation, confirmed by the same well, is in pre-salt reservoirs and at a depth of 4,275 m, appears to be an extension of the accumulation discovered previously by well-BR-63A 6-RJS in Barracuda Field area.  This last accumulation was announced by the Company in February 25, 2010 and preliminary data indicate recoverable volumes of about 40 million barrels of oil equivalent. If the “extension” assumption is confirmed, preliminary data indicates a total estimated recoverable volume of 360 million barrels of oil equivalent to these accumulations.
Tests to assess the productivity of these reservoirs are foreseen to be carried out.  The possibility of interconnecting this well to the P-48 platform is also being analyzed, currently P-48 is in operation in the Caratinga Field, taking advantage of the production and offloading infrastructure installed in the area. These accumulations will be the object of an Evaluation Plan, to be submitted to the National Petroleum Agency (ANP) soon.
The possibility of the existence of an extensive and as yet untapped post and pre-salt system in the Campos Basin can be considered a strong demonstration of the potential for new discoveries in the Campos Basin. It is important to remember that OGX has also had great success in drilling in shallow waters on the southern portion of the Campos Basin, discovering what is potentially, another significant post-salt system.
Claudio Paschoa
Photo courtesy of Seadrill