Posted to Maritime Musings (byDennis Bryant) on May 3, 2013

A barque operated as a commercial sail training vessel 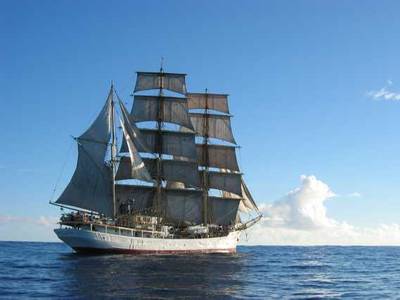 The barque Picton Castle is a commercial sail training vessel homeported in Lunenburg, Nova Scotia and registered in the Cook Islands.  It was built in Swansea, Wales in 1928 as a motorized fishing trawler and named for the local Welsh castle.  With the outbreak of World War II, the ship was requisitioned by the Royal Navy and used as a minesweeper, primarily in the North Sea.  Near the end of the war, while patrolling off the coast of Norway, the ship developed a major problem and diverted to the nearest port – Bergen, Norway.  German troops had evacuated the day previous and the HMS Picton Castle constituted the first Allied presence in the port.  The ship was unofficially hailed as the “Liberator of Norway”.  The ship, renamed the Dolmar, returned to commercial service after the war, hauling freight between ports in the North Sea and the Baltic Sea.  In 1992, it was purchased by Captain Daniel Moreland.  He converted it into a square-rigger and restored its original name.  At a length of 179 feet and a displacement of 300 tons, the Picton Castle carries 12,500 square feet of sail.  The usual crew consists of twelve professionals and up to 40 sail trainees.  The ship makes one or more long voyages annually.  It has completed five circumnavigations of the earth, as well as several extended Voyages of the Atlantic, transiting to Northern Europe, then along the coast to Africa, across to South America, and touring the Caribbean before returning to Nova Scotia.  As with any ship, its career has not been without incident.  In December 2006, while transiting south from Nova Scotia, the Picton Castle encountered severe weather southeast of Cape Cod.  A wave swamped the ship, washing overboard one of the professional crew.  Despite an extensive search, her body was never found.