The clam that produces silk 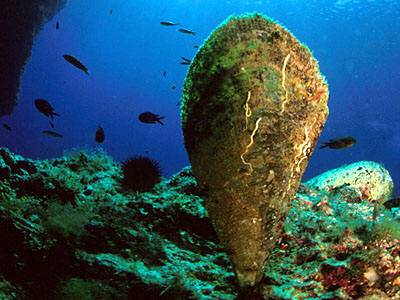 The Pinna nobilis or noble pen shell is a large clam found in the Mediterranean Sea.  It is located at depths ranging from two to two hundred feet.  The shell of a mature adult can reach a length of up to four feet in height.  The clam attaches itself to rocks on the seafloor using a strong byssus composed of silk-like keratin threads.  These threads are secreted by the byssus gland and can reach over two inches in length.  The inside of the clam’s shell is lined with nacre (mother-of-pearl).  For centuries, the byssus filaments have been harvested, treated with lemon juice and spices to turn it a golden color, and woven into a cloth called sea silk.  Sea silk is exceptionally fine in texture and commands a high price.  It was used by ancient Egyptians for wrapping mummies and was traditionally reserved for nobility.  The cloth can be woven even finer than traditional silk.  It is extremely light, warm, and translucent.  However, it is highly susceptible to moths.  The Pinna nobilis is endangered due to overfishing, the decline in seagrass fields favored by the clam, pollution, and loss of habitat.  The sea silk industry was once widespread throughout the Mediterranean, but is now limited to a few women residing on the island of Sant’Antioco off the southwest coast of Sardinia.  These are the only individuals licensed by the Italian government to harvest the byssus filaments, which has to be done carefully so as to avoid harming the clam.  The woven cloth is believed to bring good fortune and fertility.