Readers Have Ideas on How to Stop Oil Flow

I have received a number of emails and calls from readers asking me to review their ideas about how to stop the flow of oil from the deep water well following the explosion and sinking of the Deepwater Horizon. I have no where near the right qualifications to pass judgement on these ideas. What I can do is bring them here to start a discussion among the professionals in the field. 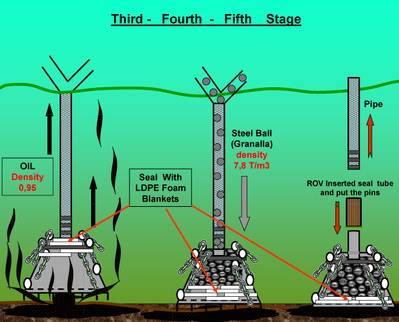 Jose I. Ramirez emailed me with the following:

"As a marine surveyor and beach master in Chile, with over 12 years experience in oil spills at sea, I deeply regret the developments in the Gulf of Mexico. This is a big environmental catastrofre serious consequences for the marine ecosystem. My contribution to try to stop oil leaking from the well, was to have sent to the BP-USA. a series of charts with the design of an structure for put  in the seabed. In addition, the sheet of plastic foam may LDPE (D = 0.003) to contain and seal large leaks, and some pictures with this foam tests conducted in my country. The idea is based on basic physics of gravity (Newton) on the push of bodies or liquids in space according to their specific gravity or density. In this scenario, the theory will be applied in seawater (D = 1027). The proposition of my idea is to exploit the oil density (D = 0.95) to rise freely to the surface through the underwater pipe and then pumped to vessels. The second stage is empty steel ball type granules (D = 7800) through the pipe, which when in contact with LDPE foam blankets located in the structure deposited at the mouth of the well plugging and sealing."