One of the largest oceanographic research vessels in the world 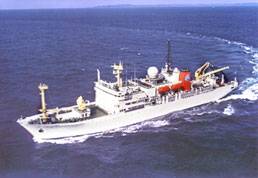 The Japanese Government’s oceanographic research vessel Mirai, at 8,687 GT and a length of 421 feet, is one of the largest vessels of its type in the world.  The ship, originally named Mutsu when launched in 1970, was one of only four nuclear-powered cargo vessels ever built – the others being Savannah (US); Otto Hahn (Germany); and Sevmorput (USSR).  After significant controversy and a minor radiation leak, the reactor was removed, diesel engines were installed, and the ship (renamed Mirai) was converted to its present mission.  The ship is operated for the Japan Agency for Marine-Earth Science and Technology (JAMSTEC) by a crew of 34 and has accommodations for up to 46 research personnel.  The hull is ice-strengthened, allowing research to be conducted in polar regions.  Its primary missions are: (1) determining the thermal cycle of the oceans; (2) resolving the material cycle of the oceans [particularly CO2]; (3) resolving the oceanic ecosystem; (4) resolving seafloor dynamics; and (5) deployment of oceanic observation buoys.  With two controllable-pitch propellers and two rudders, along with two bow thrusters and one stern thruster, Mirai is able to maintain station in most sea conditions.  It is equipped with thirteen laboratories and can also carry up to four containerized laboratories.   With hull-mounted multi-beam sonar, it conducts underway surveys of deep seafloor topography, as well as sub-bottom geological profiling.  Mirai conducts metrological studies using radiosonde and ozonosonde balloons and onboard Doppler radar.  Mirai is currently (September – October 2014) engaged on a voyage to the Arctic Ocean in cooperation with the US National Oceanic and Atmospheric Administration (NOAA) to measure the exchange (or flux) of heat, water vapor, and momentum between the atmosphere and the ocean.  Research involves study of biochemical coupling between the air and sea under stormy conditions and understanding how Arctic atmosphere soundings might improve mid-latitude weather forecasts.