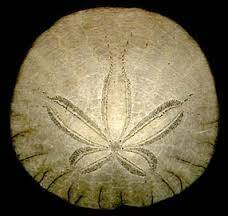 Sand dollar is a general term for various species of extremely flattened sea urchins of the order Clypeasteroida.  They may be found in temperate or tropical marine waters worldwide and are also known as sea cookies, snapper biscuits, or pansy shells.  The rigid skeleton, known as a test, consists of calcium carbonate plates arranged in a fivefold radial pattern.  While the sand dollar is alive, the test is covered by a skin of velvet-textured spines coated with cilia.  Coordinated movements of the cilia and spines enable the sand dollar to move, albeit slowly, across the seabed.  Depending on the species, the spines may be green, blue, violet, or purple.  Dead sand dollars are commonly found on beaches, devoid of spines and cilia and beached white or light brown by the sun.  The petal-like pattern on the upper surface of the sand dollar is formed by five paired rows of pores or perforations in the test through which podia for gas exchange project from the body.  The mouth is located in the center of the lower surface of the test.  Sand dollars prefer sandy or muddy seabeds from mean low water to considerable depths.  It tends to burrow, leaving a small amount of sand or mud covering the test.  It feeds primarily on crustacean larvae, small copepods, diatoms, algae, and detritus.  Podia that line the grooves on the underside move the food to the mouth.  The animals are sexual, with gametes released into the water column for external fertilization.  The larvae metamorphose through several stages before the test forms, at which time the animal becomes benthic.  When mature, sand dollars have few natural predators, the greatest risk being habitat loss.  Their common name derives from folklore that the tests were coins lost by mermaids or the people of Atlantis.

RiverNotes: A Moment on the Mississippi