A marine echinoderm with feathery arms 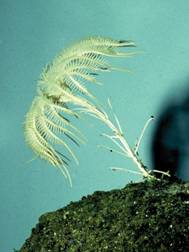 The sea lily (Bourgueticrinida) is an order of marine animals referred to as crinoids.  They are typically found in deep ocean waters (to a depth of about 18,000 feet).  In their adult form, they are attached to the sea floor by means of a stalk.  The main body is referred to as the calyx, the aboral surface of which is studded with plates of calcium carbonate.  Above that are five or more pairs of feather-like arms, from which the sea lily takes its common name.  The arms gather organic material on cilia and pass it to the mouth.  After the food is digested in the U-shaped gut, waste is ejected through the anus, inconveniently located next to the mouth.  A few sea lilies grow up to three feet in length, but most are smaller.  During the Permian period (300-250 million years ago), sea lilies flourished with 600 documented species, but only 80 species grouped into five families are known today.  A close relative, known as feather stars, is somewhat similar, but, lacking the stalk, is considered free-swimming.  The term free-swimming, though, is somewhat misleading as feather stars lack structures for significant mobility.  Free-floating may be more accurate.  The sea lily has a water circulatory system that maintains hydraulic pressure in the body.  A rudimentary blood system operates between sinus cavities to transport nutrients and to function as a respiratory and excretory system.  The nervous system is very basic.  There are separate male and female sea lilies, which reproduce by releasing sperm and egg into the sea water.  The fertilized eggs hatch into free-floating larva, which soon develop into the adult stage and affix themselves to the sea floor.  The major predator of the sea lily is the sea urchin.  Fossilized column segments of sea lilies extracted from limestone have been threaded into beads, known in the United Kingdom as St. Cuthbert’s beads and in the United States as Indian beads.

Back from the (almost) dead