Looking down on the Port of Seattle from the Space Needle. 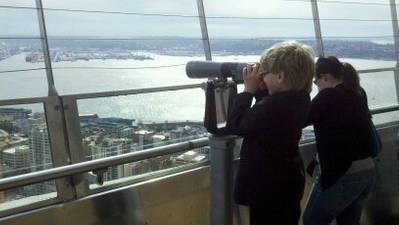 I took a trip up the Seattle's Space Needle last weekend where you can eat hot dogs and view the Port of Seattle through binoculars. It reminded me that this year is the port's 100th birthday.

To celebrate its centennial, the Port of Seattle launched a great website (http://www.portseattle100.org) with interactive maps, timelines and stories from the last 100 years. In the 30s, what is now Terminal 46, was a shack camp built by unemployed and homeless called Hooverville. In the 40s, during WWII, the Pacific Northwest needed a civilian airport so the Port of Seattle built Sea-Tac. In the 90s Japan became Washington State's top trading partner and the first shipment of Washington apples goes to Japan.

It also has a list of events planned to celebrate the centennial and of course, every year, there's the tug races during the Maritime Festival.