As the Diamond Shoals Lightship, sunk by enemy action on 6 August 1918 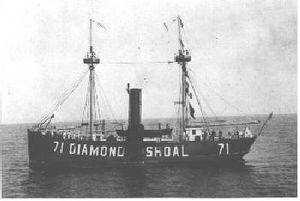 Light Vessel 71 is the only US lightship to be sunk by enemy action.  Serving as the Diamond Shoals Lightship, off Cape Hatteras, North Carolina, it was considered immune from war due to its humanitarian service.  It has been built in 1897 for the United States Light House Service (USLHS) and was originally intended to serve at Overfall Shoal in Delaware Bay.  The serving Diamond Shoals light vessel was in need of repair, though, so Light Vessel 71 was reassigned.  It was destined to serve the vast majority of its tenure at Diamond Shoals.  During the winter of 1899-1900, the light vessel was dragged off station nine times, but each time regained its station unassisted.  In January 1904, it was supplied with wireless telegraph equipment by the US Navy.  Later that year, it was fitted with a special submersible mooring buoy.  In 1905 it was equipped with an eighteen-inch searchlight which was maintained in a southeasterly direction at 45 degrees to the horizon while on station so as to improve the lightship’s visibility.  In 1906, its cluster lights were replaced with a single 375mm electric lens lantern at each of its two mastheads.  These were briefly replaced by electric arc lights in 1908, but the lens lanterns soon returned.  In 1910, a submarine bell signal was installed, which must have seriously confused any passing whales.  Finally, in 1912, a two-way radio was installed.  On 9 January 1912, the light vessel was rammed by the schooner John Bossert, causing considerable damage to the starboard hull plating and to engine room machinery.  On 24 April 1915, it took aboard the master, wife, and 10-man crew of the wrecked five-masted schooner M.D. Cressy.  In July 1917, meteorological equipment was installed so that the crew could record weather observations and report those readings twice daily.  Immediately after the United States entered World War I, German U-boats started patrolling off the US coast, and waters off Cape Hatteras was a favored patrol area because passing ships had to pass further offshore than elsewhere.  On 6 August 1918, Light Vessel 71 was on station at Diamond Shoals when the German submarine U-104 sank the freighter SS Merak.  The light vessel took onboard the Merak crew and radioed a warning to passing ships of the U-boat’s presence.  The U-boat intercepted the signal and surfaced nearby.  After warning the master of the lightship to evacuate, the U-boat sank the lightship with gunfire.  The crews of the lightship and the freighter were allowed to escape in lifeboats.