A ground-breaking 50-years of service comes to an end 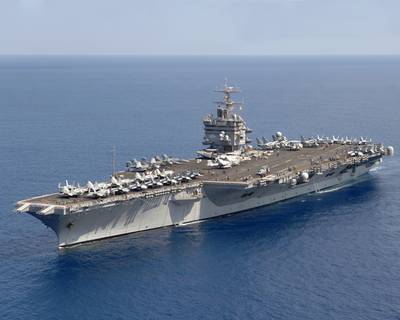 The aircraft carrier USS Enterprise (CVN-65) was deactivated at Naval Station Norfolk on 1 December 2012, after 50 years of ground-breaking service.  The 1,123-foot long vessel was laid down in 1958 and entered service in 1962 as the world’s first nuclear powered surface warship.  At the time, it was the largest ship afloat, displacing 93,284 long tons and set a new standard by which future warships and particularly aircraft carriers would be judged.  The Enterprise carries a crew of 3,000, plus an air wing of 1,800 to operate and support 60 or more aircraft.  Immediately after commissioning, the ship was deployed to the Caribbean due to the Cuban missile crisis.  In 1965, it began a series of deployments as part of the conflict in Vietnam.  On 14 January 1969, a MK 32 Zuni rocket on a parked fighter jet exploded after being overheated.  That explosion set of a series of other ordnance explosions and aircraft fires, resulting in 27 deaths, 314 injuries, and the loss of 15 aircraft.  It was the most serious accident in the 50-year career of the Enterprise.  The ship was deployed in support of operations in the former Yugoslavia and in Kuwait and Iraq, as well as numerous humanitarian missions.  Its final deployment was to serve as a show of strength in the Arabian Gulf and waters off South Asia.  Once the nuclear reactors are defueled, the Enterprise (CVN-65) will be decommissioned.  It was the eighth US naval vessel to bear the name, but will not be the last.  A future Gerald R. Ford-class nuclear aircraft carrier is scheduled to be named USS Enterprise (CVN-80).