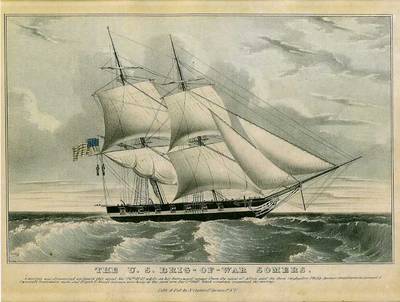 The brig USS Somers, launched in April 1842, was the second vessel of the United States Navy to bear that name.  Like its predecessor, it was named in honor of Lieutenant Richard Somers (1778-1804) who died with his crew when the bomb ketch Intrepid they was sailing into Tripoli Harbor to destroy the corsair fleet exploded prematurely.  Commander Alexander Slidell Mackenzie was appointed to command the Somers, which had a crew of 13 officers and 180 men.  In September 1842, having been designated as an experimental school ship for naval apprentices, the Somers departed New York for the west coast of Africa.  One of the midshipmen on board was Philip Spencer, the son of John C. Spencer, the Secretary of War.  Among other things, the ship carried dispatches for the USS Vandalia, then on station off the African coast.  Upon arrival at Monrovia, Liberia, it was learned that the Vandalia had recently departed, headed back to the United States via St. Thomas.  On 10 November 1842, Commander Mackenzie decided to follow the Vandalia, hoping to intercept it at St. Thomas.  During the Atlantic crossing, it was observed that morale was deteriorating.  On 26 November, purser’s steward J.W. Wales notified Commander Mackenzie that Midshipman Spencer and other crewmembers planned to mutiny and use the ship for piracy.  One of the officers learned that Spencer had been in secret nightly conferences with Boatswain’s Mate Samuel Cromwell and Seaman Elisha Small.  Spencer was immediately placed under arrest and put in irons.  Papers written in Greek were found in Spencer’s locker.  The papers listed various crewmembers as either certain or doubtful, with the rest to be disposed of.  Discipline on the ship became exacting, with one crewman being flogged and four others placed in irons for theft or missing muster.  On 30 November, Commander Mackenzie convened four wardroom officers and three senior midshipmen to interview crewmembers and make a recommendation.  On 1 December, the panel reported to Commander Mackenzie that they had “come to a cool, decided, and unanimous opinion” that Spencer, Cromwell, and Small were “guilty of a full and determined intention to commit mutiny” and that the three should be put to death.  The three were immediately hung from the yardarm and then buried at sea.  The Somers returned to New York on 14 December, where a court of inquiry was convened and exonerated Commander Mackenzie.  He demanded a court-martial, which found him not guilty of unlawful conduct.  The Somers, under a different commanding officer, served honorably in the Mexican War, until 8 December 1846.  On that date, while chasing a blockade runner off Vera Cruz, it capsized and sank during heavy weather.  Its commanding officer at the time, Lieutenant Raphael Semmes, survived.  During the Civil War, he commanded the Confederate commerce raider CSS Alabama.

US West Coast ports are way behind their foreign counterparts