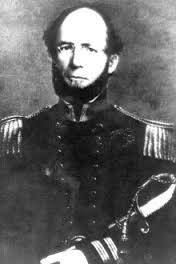 William Lewis Herndon (1813-1857) was appointed Midshipman in the relatively new United States Navy in 1828, serving afloat in the Pacific, Atlantic, Mediterranean, and Gulf of Mexico.  From 1842 through 1847, he served at the new Naval Observatory and Hydrographic Office in Washington, DC under the command of his cousin Lieutenant Matthew Fontaine Maury.  In 1851, Herndon was selected by Maury to lead the first scientific expedition to explore the Amazon River from its headwaters to the ocean.  Second in command was Lieutenant Lardner Gibbon.  Maury provided Herndon with detailed instructions on the reasons for and goals of the expedition.  The Amazon basin was recognized as huge, but due to the lack of detailed knowledge of its course, depths, currents, wildlife, and plant life, was largely unavailable for commercial utilization.  After the expedition’s departure from Lima, Peru, it reached Iquitos on 6 November 1851.  Here, Gibbon departed to explore the Bolivian tributaries, while Herndon led the main party down the Amazon.  In the Naval Appropriations Act of 3 March 1853, Congress included a specific provision ensuring full pay for Lieutenants Herndon and Gibbon from the dates they departed the United States until the final return of the exploring party.  His encyclopedic “Exploration of the Valley of the Amazon”, published by the government in 1854 became a best-seller for a public enthralled with exotic locations.  In 1855, Herndon was assigned as master of the ocean mail steamship Central America.  This was done in accordance with the 3 March 1847 statute directing that US-flag ocean steamships with contracts to carry the United States mail be commanded by naval officers.  After a number of voyages between Aspinwall (now Colon, Panama) and the United States, the Central America was caught in hurricane off Cape Hatteras on 12 November 1857.  After supervising the difficult transfer of 152 women and children to a nearby vessel, Commander Herndon stood by the wheelhouse, hat in hand, as the ship went down.  His fellow naval officers paid for erection of a monument on the grounds of the Naval Academy, the only such honor accorded a peacetime naval hero.  Now, in accordance with tradition, the “Herndon Climb” is performed annually at the end of plebe year.  To mark the transition, plebes work together to climb the 21-foot tall, lard-covered monument and replace the plebe Dixie cup with a Midshipman’s combination cap.