The world’s most wide-spread snake 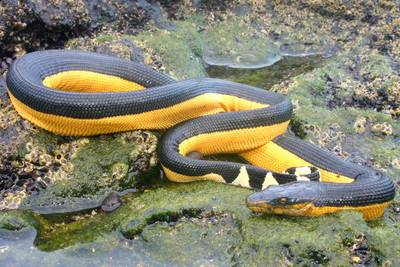 The yellow-bellied sea snake (Pelamis platura) is a pelagic sea snake, meaning that it lives its entire life at sea, including when giving birth.  Generally found in coastal waters, it is capable of surviving far at sea.  It is the only sea snake found in waters off Hawaii.  It may be found in all tropical and subtropical ocean waters (down to a water temperature of about 63°F) except for the Atlantic Ocean, the Mediterranean Sea, and Red Sea.  The yellow-bellied sea snake evolved from Asian land snakes about 10 million years ago.  The cold waters around the southern tips of Africa and South America prevented it from entering the Atlantic.  The high salinity of the Red Sea bars its presence there.  In the western Pacific, it is found as far north as Japan and Korea.  In the eastern Pacific, it traditionally has been found as far north as Baja California.  Recently, though, sightings have been made off Southern California, a development blamed on El Nino.   The maximum recorded length of a yellow-bellied sea snake is 44 inches.  Females tend to be longer than males.  They are passive hunters, drifting with the current until prey, generally small fish, swim within range.  They then use their flattened tails to attack.  Like other sea snakes, it is venomous, paralyzing its prey before consumption.  The venom of the yellow-bellied sea snake, though, is not highly poisonous.  While a number of humans, mostly swimmers, have been bitten, there are no recorded deaths from bites of these animals.  When in coastal waters, the snake spends most of the hours of darkness on the seabed (down to a depth of about 20 feet).  It is capable of cutaneous respiration, removing oxygen from the water and releasing carbon dioxide.  This process is not particularly efficient, so the snake rises to the surface several times during the night.  In addition to respiration, the lung is also used to maintain buoyancy, similar to the swim bladder of a fish.  The female is ovoviviparous, meaning that its fertilized eggs are hatched inside its body and its young, generally in broods of one to ten, are born alive.  As its name implies, the animal is distinctly bicolored – black above and yellow or brown below, with a sharp demarcation between the colors.