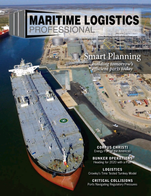 Dredging firms look ahead to more business, here and across the big pond. Along the way, Mother Nature and good business planning will both help.