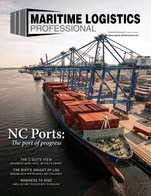 An hour with the new U.S. Maritime Administrator, Rear Adm. Mark H. Buzby, USN, Ret., is as informative as it is refreshing. Sworn in on August 8, 2017, Buzby served as president of the National Defense Transportation Association, a position he has held since retiring from the U.S. Navy in 2013 with over 34 years of service. A 1979 graduate of the U.S. Merchant Marine Academy, Buzby earned his Bachelor of Science in Nautical Science and U.S. Coast Guard Third Mate License. He was commissioned in the US Navy in June 1979, is a graduate of the Joint Forces Staff College and holds master’s degrees from the U.S. Naval War College and Salve Regina University in Strategic Studies and International Relations respectively.