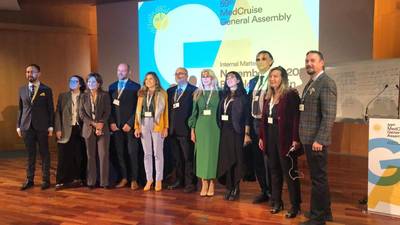 The head of cruises of the Port Authority of Valencia (PAV), Francesca Antonelli, was elected as the new senior vice-president of the Mediterranean Cruise Ports Association (MedCruise). The elections were held during the 59th edition of the MedCruise Assembly held in Barcelona where Figen Ayan, director of Galataport Istanbul was appointed as the new president of the Association.

Lorenzo Vera, representative of the Port of Motril, who has been elected vice-president, and Elisa Zamora of the Port of Tenerife have also joined the new MedCruise board of directors. Antonelli, who was running for the post together with representatives of the ports of Tenerife, Sardinia, Genoa and Civitavecchia, congratulated all the members of the new board of directors and representatives of the different ports who took part in the assembly.

MedCruise has the mission to promote the cruise industry in the Mediterranean and its adjacent seas. The Association helps its members to benefit from the growth of the cruise industry by providing networking, advocacy and professional development opportunities. It was created in 1996, through a partnership agreement between 16 ports from seven different countries. The Association now covers 21 countries, represents 140 ports and has 34 members.