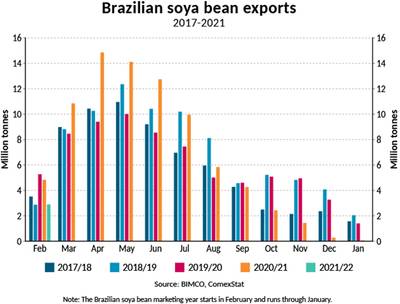 Brazilian exports of soy beans disappointed in February, the first month of its export season. Exports reached just 2.9m tonnes, representing a 40.1% drop compared with the first month in the last season when exports totalled 4.8 million tonnes, according to analysis from BIMCO.

The start to the 2021 season has thereby been the slowest since 2018, which was before tariffs were imposed on Chinese imports of U.S. soy beans, offering a boost to soy imports from Brazilian ones a boost. It is however worth noting, that after a slow start to the 2018 season, exports rose to their highest level ever (83.7m tonnes), a record that still stands today although last season came close to beating it with 81.6m tonnes.

The slow start to this season is partly due to rain currently delaying harvesting, but also to dry weather having delayed planting it in the first place. These delays do not seem to have affected the size of the harvest, and exports are expected to pick up through March and April.

“Despite a solid harvest, BIMCO does not expect Brazilian soy bean exports in 2021 to perform as well as in 2020, as stocks have been depleted by hungry Chinese buyers last year. This leaves much smaller reserves than what was available last year,” said Peter Sand, BIMCO’s Chief Shipping Analyst. “With the Chinese pig herd quickly returning to pre-culling levels after the African swine fever outbreak, Chinese soy bean demand will still be strong this year, even though the high imports from 2020 mean plenty of stockpiles. The extent to which China decides to draw on these rather than on importing or maintaining and building stocks further, will likely determine just how strong the soy bean trade will end up in 2021.”