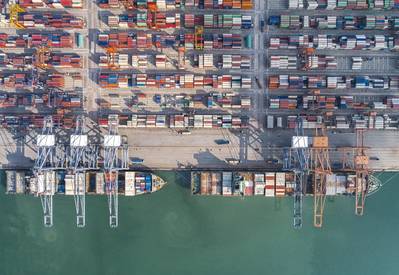 North American import of containerized goods from the Far East soared to a noteworthy high of 1.62m TEU during February 2021, a 100% increase from the low point of the same month last year. Fueled by US stimulus, volumes moving on the trans-pacific trade lane to consumers and businesses in North America thereby defied all obstacles during a month usually characterized by slow activity.

In particular, the US economic stimulus packages have worked magic for the container shipping industry, gaining strength eight months in a row.

In a normal year, February volumes are seasonally low due to the impact from the Chinese Lunar New Year when exports out of the Far East drop as factories close for the holiday.

“If you ask the ports of San Pedro bay on the U.S. west coast, they will tell you that this massive surge in volumes is a double-edged sword. Record-breaking business activity overloads logistic chains in and around the ports, both ashore and at sea,” says Peter Sand, BIMCO’s Chief Shipping Analyst.

“Additionally, if you ask the liner shipping companies, they will tell you that demand is spectacularly strong, but that it also creates multiple disruptions on their part, especially around the main import ports,” says Sand.

Back in San Pedro Bay, 25 container ships waited to berth in Los Angeles and Long Beach on Monday 12 April.

“Some containerships are waiting for up to 14 days before berthing. Due to congestion inside the port areas, the total days at berth can stretch to 10-12 days. A three-week turnaround time, from arrival at the anchor to departing from the terminal may the slowest on record too,” Sand says.

Even before the “Ever Given” ran aground in the Suez Canal on the morning of 23 March, supply chains connecting the Far East and Europe were stretched. Not because of record breaking import volumes in Europe – in fact, they dropped in 2020 by 5.4%, but because of the impacts of the pandemic on global manufacturing and tightly run supply chains. Later, also because of the massive surge in North American imports, it will ripple across to all other trade lanes. 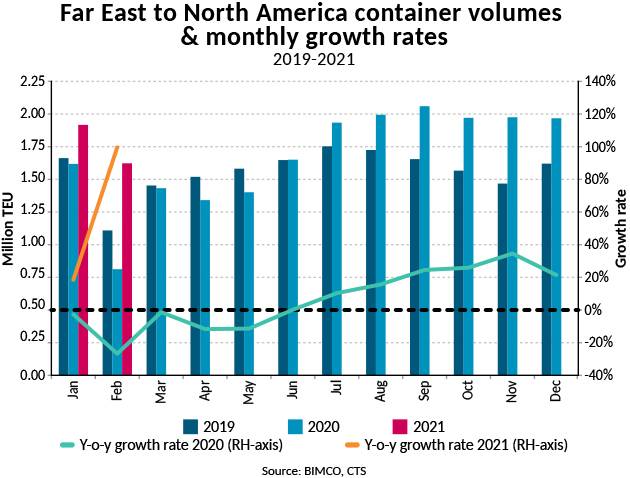