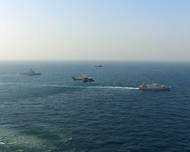 Top oil exporter Saudi Arabia said on Saturday it has resumed all oil shipments through the strategic Red Sea shipping lane of Bab al-Mandeb.Saudi Arabia halted temporarily oil shipments through the lane on July 25 after attacks on two oil tankers by Yemen's Iran-aligned Houthi movement.A statement by the Energy Ministry said shipments had resumed on Saturday."The decision to resume oil shipment through the strait of Bab al-Mandeb was made after the leadership of the coalition has taken necessary measures to protect the coalition states' ships…

More than 10,000 people killed in Yemeni conflict. The Saudi-led coalition fighting in Yemen said on Wednesday it would keep Yemen's Houthi-controlled Hodeidah port open for a month, despite a fresh missile attack at Riyadh, but it kept up air strikes that killed at least nine people. The Western-backed coalition, which controls Yemen's airspace and port access, said last month it would allow humanitarian aid through Hodeidah following a nearly three-week blockade imposed because of a missile attack towards the Saudi capital's international airport.

The Saudi-led military coalition fighting against the Houthi movement in Yemen said on Wednesday it would allow aid access through the port of Hodeidah and United Nations flights to Sanaa airport. The coalition closed all air, land and sea access to Yemen earlier this month following the interception of a missile fired towards the Saudi capital. It said it had to stem the flow of arms to the Houthis from Iran, seen by Riyadh as the movement's main backers. Aid agencies warned…

The United Nations' special envoy to Yemen said on Monday he wanted to prevent any attack on the Houthi-held Red Sea port of Hodeidah and also called for the central bank's independence to be maintained to allow it to pay salaries on both sides of the conflict. Both aims have been the main conditions set by the Houthi group controlling the capital Sanaa for holding talks aimed at reaching a political settlement of the conflict. Hodeidah port and province is also controlled by…

An attack on Yemen's Hodeidah port would push the country closer to famine as humanitarian agencies have no other way to deliver all the food and aid that is needed, a U.N. official said on Thursday. A Saudi-led military coalition has been preparing an assault on the key Red Sea port, which is the point of entry for nearly 80 percent of Yemen's food imports. Earlier this month, a coalition source said the alliance was preparing facilities in Aden and Mukalla in south Yemen as alternative entry routes for urgent aid in the event that Hodeidah port was affected by military operations. But U.N.

A Saudi-led force in Yemen said it rescued passengers on Saturday from a vessel being used by the United Arab Emirates military that was attacked by Houthi fighters in a strategic Red Sea shipping lane. "The coalition rescued civilians from a vessel targeted by Houthi militias ... that was transferring medical aid to the city of Aden and evacuating wounded civilians for treatment," the coalition said in a statement on Saudi state news agency SPA. Hundreds of Emirati soldiers in an Arab alliance have been fighting Yemen's Iran-allied Houthis…

Hundreds of thousands of children in Yemen face life-threatening malnutrition, millions lack access to health care or clean water, and some have been drafted as soldiers in the year-old war, the United Nations Children's Fund said on Tuesday. A UNICEF report said all sides had "exponentially increased" the use of child soldiers in the conflict between Houthi forces, allied to Iran, and a Saudi-led coalition supporting Yemen's President Abd-Rabbu Mansour Hadi. It knew of 848 documented cases, including boys as young as 10.