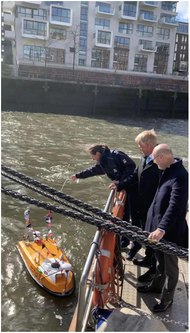 ​Water Drone Christened in the Port of Hamburg

A 1.65-meter-long water drone, also known as unmanned surface vehicle (USV), was christened on Wednesday morning. The USV named Echo.1 is dedicated to measure water depth and can work continuously for up to six hours without emissions.Senator for Economic Affairs Michael Westhagemann and Jens Meier, Managing Director of the Hamburg Port Authority (HPA), Rike Verheye from the HPA Hydrography christened the yellow drone.According to HAP, Echo.1 will be able to travel up to six hours…

In 2020 a lot will happen in the port of Hamburg. Jens Meier, Managing Director of the Hamburg Port Authority, gives an outlook and reports on the major port topics of the year in two episodes of PORT IS WHAT WE DO. In this first episode, he reports on the current status and significance of the major project to adjust the fairway of the Elbe. He also talks about sustainability, which will remain one of the most important topics in the Port of Hamburg in 2020, e.g. supplying ships with shore-side electricity.

Germany’s largest universal port, the Port of Hamburg, reported a container throughput of 7 million TEUs for the first three quarters of this year, representing a growth of 6.9 percent year-over-year.The climb in container handling is primarily attributable to the four new transatlantic services, plus four new Baltic feeder services. Since the beginning of the year, the new transatlantic services operated by Hapag-Lloyd and ONE have connected Hamburg with ports in the USA, Canada…

Delegates from the world’s leading ports have come together to examine their role in the rapidly evolving maritime logistics landscape and in particular to coordinate their contribution to the establishment of an interconnected maritime supply chain at the Port of Barcelona.The multilateral partnership of the world leading ports, ChainPORT, has just concluded its 4th Annual Meeting which was hosted last week by the Port of Barcelona.ChainPORT was initiated in 2016 by the Port…

The EU Commissioner for transport, Violeta Bulc, visited the Port of Los Angeles as part of a longer mission to the US and Costa Rica on Thursday 27 September.The European Sea Ports Organisation (ESPO) was invited to support the visit and contribute to the roundtable discussion  with Violeta Bulc, Gene Seroka (CEO of the Port of Los Angeles), Santiago Garcia Mila, (Deputy Director General, Port of Barcelona), Jens Meier (President of the Port of Hamburg), Victor Schoenmakers (Director Corporate Strategy, Port of Rotterdam).

In the last business year, the high quality services provided by the Port of Hamburg’s operators has lead to a stable handling result comparable with the previous year. With the impending adjustment to the Elbe fairway, potential for growth will be enhanced. Through investments in infrastructure the Port of Hamburg counts among the cutting edge hubs on the international sea trades. At the same time, companies are driving change in the port with the development of digital business models.

Port of Hamburg Getting Ready for Future Growth

Europe's third-largest container port, Port of Hamburg, is preparing for the future with improved infrastructure and digitalization. Frank Horch, Hamburg’s Senator for Economics, Transport and Innovation, said: "The Port of Hamburg must become a Port 4.0 , with digitalization and how this will change supply chains. We will improve the infrastructure, implement the fairway adjustments and secure good general conditions. When extending the port it will be important to identify how Hamburg as a broad based universal port can be economically sustainable…

Hamburg Port Authority has joined forces with Deutsche Telekom and Nokia to test 5G applications at the Port of Hamburg. "Testing of 5G is to commence in an industrial environment in the Port of Hamburg, with the Hamburg Port Authority, Deutsche Telekom and Nokia commissioning an 8000-hectare area with which to carry out key tests of various aspects of 5G functionality, including network slicing," said a press release. 5G will be tested with use cases like traffic lights management, data processing from mobile sensors and virtual reality.

“The Federal Administrative Court in Leipzig has expressly underlined the necessity for the adjustment of the navigation channel with its decision today,” says Jens Meier CEO of Hamburg Port Authority commenting on the judgement of the Federal Administrative Court for the fairway adjustment of the Lower and Outer Elbe. “The navigation adjustments will come, now it is a question of extending the process. We will concentrate on the questions of possible fluctuations of the salinity of the Elbe and habitat protection impact assessment.

This year’s IAPH World Ports Conference will be held in Hamburg from June 1-5. International representatives from business, politics and science will gather in Hamburg to debate changing demands and alternative actions required in our times of globalization and climate change. The conference will focus on the smartPORT concept developed by the host of the conference, the Hamburg Port Authority (HPA). During the five-day conference delegates will get to hear about what Hamburg, Europe and the world mean by intelligent port management.

The Port of Hamburg continues record performance handling a total of 72.6 million tons (+ 6.6 percent) in the first six months of 2014. Hamburg’s universal port with 50.7 million tons of predominantly container handling achieves a result of 4.8 million TEU (20-ft standard containers), an increase of 6.8 percent. The largest seaports on the north European continent show an average growth in total handling of 1.8 percent and in container handling of 2.6 percent. The Port of Hamburg can look back on above average growth in container traffic, building up its market share from 25.7 to 26.7 percent.

In the first three months of 2012 the Port of Hamburg achieved total throughput of 32.6 million tons (+ 3.8 percent). At 2.2 million TEU (20-ft standard containers), throughput on the container handling that predominates in Hamburg as a universal port was 5.2 percent higher than in the first quarter of 2011. Compared to the main ports further West, Hamburg thus gained additional market share and strengthened its position as the Northern European hub for container traffic; Rotterdam’s throughput was down by 3.9 percent, while Antwerp’s increase was comparatively minimal at 0.7 percent.

With 110 million tons of sea-borne cargo handled in 2009, a year impacted by the global economic and financial markets crisis, Germany’s biggest universal port fell short of the previous year’s result by around 30 million tons (- 21.4 percent). Improvements are in sight for the year 2010, and port-related industries anticipate a moderate level of growth. Claudia Roller, Chairwoman of Port of Hamburg Marketing Association presented the cargo-handling figures for 2009 at the annual Port of Hamburg press conference.