Energy giant BP has agreed a $625m deal to sell a package of North Sea assets. Premier Oil will take over the Andrew platform and BP's controlling stake in five surrounding fields, as well as its minority stake in the Shell-operated Shearwater field.BP operates the Andrew assets – comprising the Andrew platform, the Andrew (62.75%), Arundel (100%), Cyrus (100%), Farragon (50%) and Kinnoull (77.06%) fields and associated subsea infrastructure. It holds a 27.5% stake in the Shell-operated Shearwater field.“BP has been reshaping its portfolio in the North Sea to focus on core growth areas…

DNV GL has been supporting Dana Petroleum on the development of the Western Isles field and the Western Isles floating production storage and offloading (FPSO) vessel as it progressed towards first oil, which was achieved earlier this month. DNV GL has been engaged by Dana since 2012, as the classification society, verification body and marine warranty provider on the Western Isles FPSO, a Sevan Series 400 cylindrical monohull with a 44,000 bbl/d topsides facility. Uniquely, it is not only the first complete engineering procurement and construction (EPC) FPSO project constructed in China…

InterMoor, an Acteon company, has successfully completed the final tensioning and chain cutting operations on the FPSO Turritella for the Shell Stones project, located in the Walker Ridge protraction area in the Gulf of Mexico (GoM). The FPSO Turritella will connect to subsea infrastructure located beneath approximately 9500 ft (2896 m) of water, breaking the existing water depth record for an oil and gas production facility. This ultra-deep water project marks the first FPSO for Shell in the GoM, and the second FPSO in the GoM.

Pupils at an Aberdeen primary school were given a rare insight into the depths of the oil and gas industry’s subsea sector after getting to sit in the driving seat of a remotely-operated vehicle (ROV) simulator. The Tullos Primary visit to i-Tech was organised by EnQuest as part of the company’s ongoing commitment to encouraging youngsters to consider a career in the oil and gas industry. Around 20 primary five pupils were shown why ROVs are increasingly becoming pivotal to the critical path of subsea operations during the tour at i-Tech…

BMT Asia Pacific (BMT), a subsidiary of BMT Group Ltd, has been appointed Owners Engineer and lead design consultant by Endeavour Energy for the development of the LNG storage and regasification facility, a part of the Ghana 1000 Gas to Power Project and Africa’s first LNG import terminal. Endeavour is co-leading development with General Electric, Eranove and local partners Sage Petroleum with the aim of providing the Ghanian government with Sub Saharan Africa’s largest power park, providing more than 1000MW to the national grid once completed.

FMC Technologies Inc. and Technip today signed an agreement to form an exclusive alliance and to launch Forsys Subsea, a 50/50 joint venture that will unite the skills and capabilities of two subsea industry leaders. This alliance will redefine the way subsea fields are designed, delivered and maintained. Bringing the industry’s most talented subsea professionals together early in the project concept phase, Forsys Subsea will have the technical capabilities, products and systems… 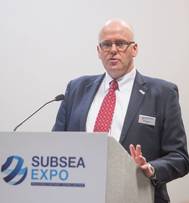 The fast-growing UK subsea sector, which supports 60,000 jobs, is in for two years of tough times and will only weather the storm if it embraces innovation and new technology, says industry body. On the opening day of Subsea Expo, Europe’s largest subsea event, the chief executive of Subsea UK told delegates that the industry is facing considerable challenges but the fundamentals in subsea remain relatively strong and the sector could see a significant improvement in 2017-2019. Neil Gordon said, “The swingeing capex cuts and low crude price are beginning to bite.

Saipem: A Fleet Grows in Brazil

As some pre-salt plays begin production, a wide range of subsea infrastructure is being built, with O&G transportation pipeline grids being one of the vital downstream systems. Saipem has been recipient of the first major contracts to install deepwater pre-salt pipelines by national operator Petrobras. Claudio Paschoa, Maritime Reporter’s correspondent in Brazil brings us an in-depth look at Saipem’s vessels and projects in Brazil. Saipem’s pipelaying segment is part of a unified Business Unit Engineering & Construction…

As Pulse Structural Monitoring (Pulse), an Acteon company, continues to expand, its Houston office has announced the appointment of two new business development managers to drive the growth of its U.S. operations. The company appointed Paul Chittenden as the business development manager for production riser and pipeline systems. Chittenden joins Pulse from General Electric (GE) Oil and Gas, where he was the tender manager for drilling and production top-tensioned riser systems and a project manager for subsea and surface wellhead systems.

Technip wins a lump sum contract for development of subsea infrastructure for the Cardamom field located in the Gulf of Mexico, Garden Banks block 427. The field is at a water depth of approximately 830 meters, and the project consists of a subsea tie-back to the Auger tension leg platform, wholly owned by Shell Offshore Inc. The contract covers the project management, engineering, fabrication and installation of the East and West Loop 12.8 kilometer pipe-in-pipe flowlines with associated PLETs and steel catenary risers.