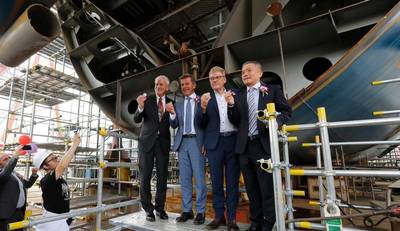 European aesthetic and design, and Chinese ship-building efficiency combine to produce the intimate expedition ship Ocean Victory that deliver on refinement, along with cutting-edge design and operations, claimed a press release from the company.

Representatives from the owner, the charterers - American Queen Steamboat Company and Albatros Expeditions - participated in the ceremony.

The Ocean Victory is scheduled to be launched in April 2020 and to be delivered in October 2020.

Ocean Victory is small enough to provide an exclusive atmosphere, yet big enough to offer all expected services and facilities like a swimming pool, restaurants, lounges, bar, gym and spa.

The cruise ship will offer an up-close look at the beauty of Alaska and British Columbia both onboard and with shore excursions.

"The Vessel will commence Antarctica Cruises from December 22nd, 2020 for Albatros Expeditions and for the summer season American Queen Steamboat Company will operate the vessel on Alaska Cruises," said the release.