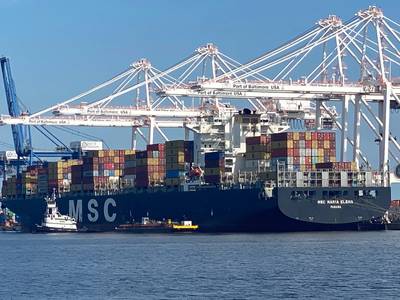 The Maryland Department of Transportation Maryland Port Administration (MDOT MPA) announced release of the federally approved Environmental Assessment for the project to reconstruct the CSX-owned, 126-year-old Howard Street Tunnel in Baltimore to allow for double-stacked intermodal container trains to and from the Helen Delich Bentley Port of Baltimore. Double stacking allows two shipping containers stacked on top of each other, and this project will increase container capacity and business at the Port and create thousands of jobs.

The comment period for the Environmental Assessment begins Monday, March 1, 2021, and runs through Tuesday, March 30, 2021, allowing the public to submit questions and comments. The Environmental Assessment is available for public review and comment at www.mpa.maryland.gov/HST. Comments can be emailed to the project team at hst@marylandports.com, or mailed directly to Bradley Smith at MDOT MPA, 401 E. Pratt St., 19th Floor, Baltimore, MD 21202.

“The project to allow double stack trains in the Howard Street Tunnel has been one of our administration’s top priorities,” said Governor Larry Hogan. “As the Port of Baltimore and the international maritime industry continue to bounce back from the impacts of COVID-19, this project will increase business at the Port, generate thousands of new jobs and spur growth for the entire state economy. I want to thank MDOT, CSX, our congressional delegation and all our project partners for advancing this critical project.”

The project consists of vertical clearance improvements at the Howard Street Tunnel and 22 other locations between Baltimore and Philadelphia. The existing Howard Street Tunnel will be reconstructed to provide an additional 18 inches of clearance within the tunnel. There are three additional bridges in Baltimore City that require superstructure work: the North Avenue bridge will be modified and the Guilford Avenue and Harford Road bridges will be fully replaced. Other locations in Maryland, Delaware and Pennsylvania only require track lowering beneath the structures.

With its supersized cranes and deep container berth, the Port of Baltimore is one of only a few East Coast ports that can accommodate some of the biggest ships in the world. Height restrictions within the Howard Street Tunnel prevent shipment of double-stacked containers by rail to and from the Port and up and down the East Coast. Double stacking capabilities at the Howard Street Tunnel will allow the Port to handle 160,000 additional containers annually. It would also generate 6,550 construction jobs while an additional 7,300 jobs would be created because of the increased business.

Double stacking also will provide a more cost-effective way to transport freight by rail compared to trucks, reducing congestion along the I-95 corridor and delivering environmental benefits with less emissions. 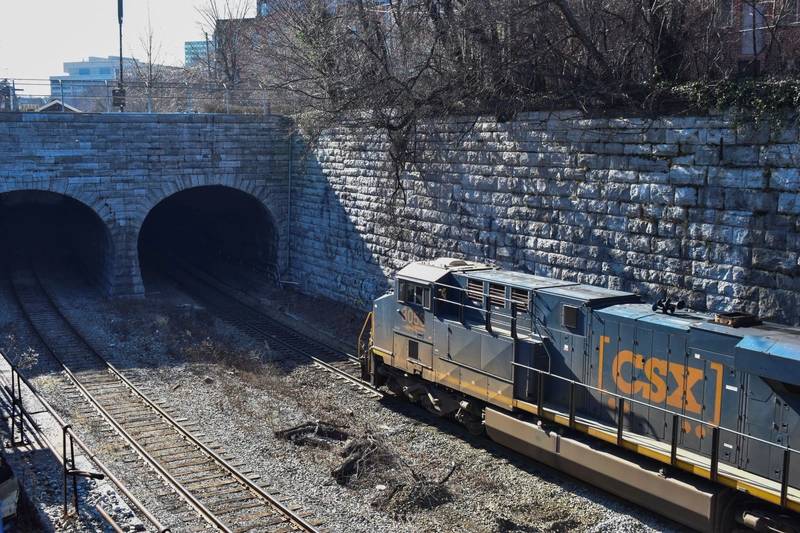 “The Howard Street Tunnel project highlights how critical infrastructure investments can benefit the entire region,” said MDOT Secretary Greg Slater. “This partnership between state, local and federal agencies and the private sector will enhance the regional supply chain and allow the Port to deliver ship-to-front door service. The result will be more jobs, an increase in Port capacity and a significant boost to the state economy.”

“Having double-stack capabilities at the Howard Street Tunnel is mission critical for the Port of Baltimore,” said MDOT Maryland Port Administration Executive Director William P. Doyle. “Our container business is seeing a remarkable turnaround from earlier COVID-19 impacts, and a major reason for that has been e-commerce because of our close proximity to so many distribution, fulfillment, and sorting centers. The Howard Street Tunnel will seamlessly complement our e-commerce capabilities and the ability to double-stack trains will open up opportunities for more business to the Midwest markets and grow jobs at the Port.”

The Howard Street Tunnel project outreach team has worked with community groups such as the Charles Village Civic Association, and is committed to continue engagement beyond the 30-day comment period. Community groups seeking more information or a virtual briefing after the comment period may contact the project team at hst@marylandports.com.

“CSX applauds the efforts of the State of Maryland and the Federal Railroad Administration in conducting a thorough environmental assessment,” said Brian Hammock, director of state relations for CSX. “This marks a key milestone in moving this critical infrastructure project forward.”

Seagirt Marine Terminal is operated under a public-private partnership (P3) with Ports America Chesapeake. Construction for a second, 50-foot-deep berth at the Seagirt is moving forward. The additional berth will allow the Port to handle two ultra-large ships simultaneously and further necessitate the need for the Howard Street Tunnel project. Four additional supersized, Neo-Panamax cranes are scheduled to arrive in July and will be operational later this year.

“We’re excited about how the Howard Street Tunnel will benefit the Port of Baltimore,” said Ports America Chesapeake Vice President Bayard Hogans. “Ports America Chesapeake is making significant infrastructure and technological investments to improve and grow the Seagirt Marine Terminal.  We look forward to continued progress on this project and the eventual ability to double-stack trains and increase the Port’s container business.”

“This is a great project for our ILA workforce,” said Scott Cowan, president of ILA Local 333.  “It’ll increase container business at the Port and generate more work hours for our men and women – a win-win.”

For years, reconstruction of the Howard Street Tunnel to accommodate double-stack trains was estimated to cost between $1 billion and $4 billion, with significant disruption to surrounding communities. By utilizing advances in construction technology, CSX and Maryland have determined it is possible to provide double-stack clearance for significantly less money and minimal impact to communities.

In the most recent reporting period in January, containers at the Port of Baltimore were up seven percent compared to low points during the early stages of the COVID-19 emergency. The recent container volume increases include 14 “ad hoc” ship calls from mid-July through early March totaling nearly 18,000 Twenty-foot Equivalent Unit (TEU) containers. Ad hoc ships are vessels that were diverted to Baltimore that were not on a regularly scheduled service.

The Port of Baltimore generates about 15,300 direct jobs, with nearly 140,000 jobs overall linked to Port activities. The Port ranks first among the nation’s ports for volume of autos and light trucks, roll on/roll off heavy farm and construction machinery, and imported gypsum. It ranks 11th among major U.S. ports for foreign cargo handled and 10th for total foreign cargo value.

The health and safety of the Port of Baltimore workforce is paramount, and the public marine terminals have maintained stringent CDC-recommended health and safety measures to ensure safety of its labor force, tenants and partners. MDOT MPA encourages the use of face coverings and social distancing measures for individuals working at the marine terminals, and encourages teleworking for those able to do so. Temperature screenings and other preventative procedures are also continuing.