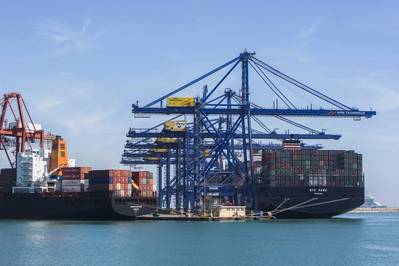 The Valencia Containerized Freight Index (VCFI) exceeds 2,000 points with a growth in April of 17.39%

The Valencia Containerized Freight Index (VCFI) continues its upward trend, reaching 2,314.89 points in April, an increase of 17.39% over the previous month. In a global context marked by the generalized growth of freight rates, the VCFI links its ninth consecutive month of growth and exceeds two thousand points for the first time in its history since the index began in January 2018. The effects of the incident with the Ever Given vessel in the Suez Canal, released at the end of March, have added to the complexity of an already stressed market. To this, we must add the upward forecasts for world GDP which reinforce market demand, the congestion in the main US ports and the increase in the price of some fuels.

Thus, the April World Economic Outlook, published by the International Monetary Fund (IMF), points to an increase in world GDP in 2021 of 6%, compared with the estimate of 5.5% in January and 5.2% in October 2020. Regarding trade in goods, the projection is for a growth of 9.4%, 1.1 points higher than in the previous report. With regard to port traffic, the RWI/ISL Container Throughput Index benchmark reflects an increase in March (latest available month), which places shipping levels above the pre-pandemic situation.

According to Alphaliner data, the commercially idle fleet remains at minimal levels, i.e. 56 vessels, representing 0.8% of total capacity. In terms of equipment, some shipping lines have announced orders for new units to alleviate the market situation.

With regard to bunker prices, the behavior during this month has been fairly stable. According to Shipandbunker data for the main bunkering ports, the price of low sulphur bunker fuel closed April at 514 dollars per tonne, which represents an increase of 3% compared to the beginning of the same month.

By geographical areas, and given their relevance in Valenciaport's relations, it is worth highlighting the increase in export freight rates to the U.S. and Canada of more than 30%, which has now increased for nine consecutive months. In addition to demand factors, the congestion situation that some US ports have been suffering for weeks is exerting constant pressure on freight rates. The trend seems to be pointing, albeit timidly, towards an improvement, even if the problem remains serious, as illustrated for example by the 7.5 days waiting time required for ships to berth in the ports of Los Angeles or Long Beach. Problems of capacity or availability of equipment are thus aggravated. In fact, this situation is being extended to the entire American continent and the restrictions are also causing freight rates to rise.