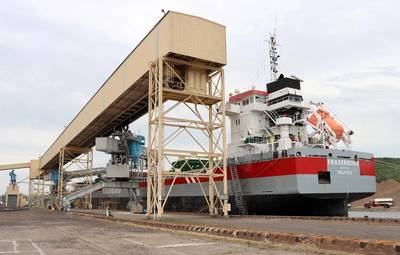 U.S. Great Lakes ports reported mixed results in June with aluminum, road salt and grain shipments holding strong despite the coronavirus pandemic, while shipments of commodities related to steel production and manufacturing have continued to slide.

Additionally, the St. Lawrence Seaway reported that from April 1 to June 30, nearly 11.7 million metric tons of cargo was shipped via the bi-national trade corridor. While these volumes were down 8% compared to the same time period in 2019, cargo shipments improved in June narrowing the year-over-year decline.

"American ports and the Seaway have benefited from worldwide demand for grain for food staples, continuing shipments of road salt and Canadian aluminum and general cargo like wind turbine components,” said Bruce Burrows, President and CEO of the Chamber of Marine Commerce, a trade association representing the maritime industry in the Great Lakes, St. Lawrence, Coastal and Arctic regions. “That being said, declines in shipments of coal, steel imports and steel-making materials remain, reflecting the challenges faced by the manufacturing sector during the pandemic. There is still a way to go for recovery.”

Port Milwaukee has been economically resilient the first half of this year, reported Port Director Adam Schlicht. He explained, “Despite numerous challenges, including a restrictive international tariff climate and economic uncertainty due to the COVID-19 pandemic, the port’s commercial activity is up 2% when compared to 2019. Led by increasing shipments of Wisconsin-grown grain, the movement of other commodities such as road salt and cement has also been consistent.”

Schlicht added, “We are cautiously optimistic that tonnage will remain strong the rest of 2020 as customers turn to Port Milwaukee as a reliable, safe, and health-conscious supply chain partner.”

The Port of Toledo reported that overall tonnage from March through June is down about 15% compared to last year. The drop in tonnage comes despite general cargo shipments that have more than doubled.

“We’ve seen a lot of aluminum shipped so far this year with Toledo serving as a strategic location for metals distribution over the last decade,” said Joseph Cappel, VP of Business Development for the Toledo-Lucas County Port Authority. “We have surpassed 3 million total tons this season and remain hopeful that we can close the gap with last year if the grain harvest is good. Declines in coal tonnage and certain dry bulk products, however, are certainly a reflection of the impact COVID-19 has had on the manufacturing and construction industries in our region.”

June was a relatively strong month for the Port of Green Bay with imports of nearly 110,000 tons of salt and 73,000 tons of limestone. Total imports and exports hit nearly 288,000 tons in June to move the year-to-date totals 3% ahead of the same time a year ago. Besides the salt and limestone shipments, imports of petroleum products have also been strong for the Port of Green Bay.

“Last year was very good for the port, hitting tonnage levels we hadn’t seen since 2007,” said Green Bay's Port Director Dean Haen. “To be ahead of that pace for this year is tremendous. The June tonnages certainly provide reason for optimism and we hope to see that continue as we move through the rest of the 2020 shipping season.”

Among the port’s traditional Seaway commodities seen thus far were imports of salt, imports and exports of petroleum products, and imports of limestone—each showing growth over this time last year. Additionally, the Port welcomed a noteworthy Seaway movement of wood pulp from Brazil in June that will be used by the paper industry for the production of diapers and wipes.

“The June tonnages certainly provide reason for optimism,” Haen added. “There are, of course, many variables at play, but it’s encouraging to see our tonnage outpacing 2019 at this point.”

In June, the port also handled a gantry crane disassembled from Finland and South Korea that will be used in a local rail yard for discharging containers from intermodal trains, equipment from Southeast Asia for use in regional natural gas electric generating stations, and traditional steel shipments from Belgium, Germany and the Netherlands.

Through June 30, grain shipments at the Port of Duluth-Superior remained robust, tracking nearly 22% ahead of the five-season tonnage average, but the port’s tonnage leader, iron ore, slipped 10%.

“Comparing May to June, total tonnage through the Port of Duluth-Superior increased almost 6%, led primarily by coal, which topped May’s float by more than 376,000 tons. Inbound limestone shipments also climbed in June,” said Deb DeLuca, executive director of the Duluth Seaway Port Authority. “Despite those month-over-month gains, total tonnage for the season is down 29% compared to 2019 and the five-season average as North America continues grappling with the effects of COVID-19.”

The Port of Cleveland, similar to other ports and transportation sectors in the global supply chain, experienced a decrease in cargo volumes through the month of June at its general cargo and bulk terminals.

Dave Gutheil, Chief Commercial Officer at the Port of Cleveland, said, “These decreases can be attributed directly to the COVID-19 pandemic, and its impact on various industries that rely on steel and manufactured goods. We expect that July volumes in our general cargo sector will improve. To prepare for increased volumes in the future, we are in the midst of two major infrastructure projects that will improve the efficiency of our operational capabilities at both terminals, which will lead to cargo growth when completed.”