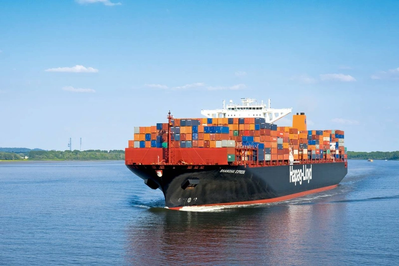 China's efforts to control the virus had extended the normal factory shutdowns for the New Year festivities to anywhere between Feb. 8 and Feb. 14, depending on the region, a spokesman for the world's fifth largest container carrier told Reuters.

However, Hapag-Lloyd's fleet was operating largely as normal, while having to adhere to stricter safety and hygiene regulations, he said in response to questions.

The new coronavirus has infected tens of thousands in China, shutting down cities, disrupting air travel, and hitting supply chains, though sea ports have stayed open.

"We have seen blank (empty) sailings, but that is a normal process during the New Year holidays," the spokesman said.

He could not quantify the impact of the health crisis on delivery volumes or give details of delays.

Port terminal operations were largely back to normal, except for some isolated cases where, for example, truck capacity in some ports was still reduced, he said.

Hapag-Lloyd office staff in China were still mostly working from home, while others were being advised to avoid business trips to China, he said.

Staff on ships were asked to remain onboard in ports to avoid exposure and wear face masks. Crews were not being exchanged in China, he added.

The company will report fourth quarter 2019 results on Feb. 19, covering a period before the virus outbreak.

Rivals Maersk, MSC and CMA CGM said earlier in February they had reduced calls to China.

Maersk and Other Danish Firms Partner for Sustainable Fuels Project