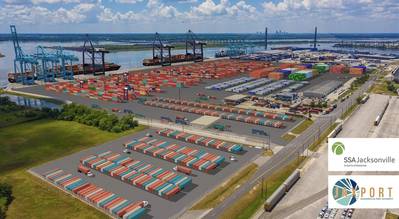 Upon completion of the project in 2024, the SSA facility will be able to accommodate up to 500,000 TEUs (containers) annually, a 150 percent increase over the facility’s current throughput. The expansion will grow JAXPORT’s total TEU throughput capability to nearly two million TEUs a year, an increase of more than 40 percent.

Completing the expansion in phases is planned to allow the terminal to remain open and operational throughout construction.

“We are excited with the progress being made to modernize SSA’s presence at JAXPORT, which will enhance our capacity and capabilities in Jacksonville,” said SSA Conventional President Mark Knudsen. “As completion of the deepening project nears, this facility offers an expanded and highly productive international container terminal that’s ready to handle the growing demands of cargo owners and shipping lines looking to take advantage of the efficiencies the region offers.”

JAXPORT and SSA entered into a 25-year lease on the terminal in 2019.

The $72 million capacity expansion is funded in part through a $20 million grant from the U.S. Department of Transportation Maritime Administration (MARAD). The project has a Jacksonville Small and Emerging Business (JSEB) participation goal of 17 percent, with about $12.2 million of the total project cost targeted for completion by area small businesses.

“We are grateful for the strong partnership we have with SSA, as well as the support we have received from our partners at the federal government, who together have made this public-private partnership possible,” said JAXPORT CEO Eric Green. “Their investment in our facilities helps maximize the return on investment of the deepening project for our community, and enables us to bring more cargo—and the jobs and businesses that come with it—to Northeast Florida.”

The federal project to deepen the Jacksonville shipping channel to 47 feet will be completed through Blount Island in 2022. The deepening project includes construction of a vessel turning basin that will allow larger ships to turn at Blount Island. More than $100 million in berth improvements to enable the facility to simultaneously accommodate two post-Panamax ships will be completed in coordination with the deepening project.

JAXPORT is Florida’s largest container port and one of the nation’s top vehicle-handling ports. More than 98 million consumers live within a day’s drive of JAXPORT’s terminals, with major Interstates located as close as a mile from port terminals.