Jones Act Does Not Raise Cost of Living in Hawaii -Study 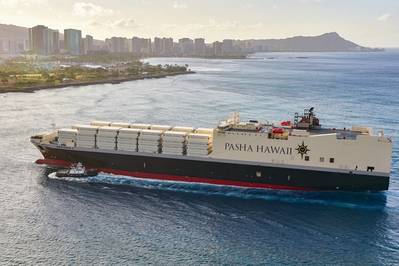 The Jones Act has no significant impact on the cost of living in Hawaii, according to a recent report produced by economists from Boston based Reeve & Associates (Reeve) and Hawaii based TZ Economics.

“The Impact of the Jones Act on Hawaii” also found that freight rates in the U.S. mainland-Hawaii trade lane have declined in real terms over the last 10 years, while the Jones Act has delivered positive and substantial economic contributions, including job creation, new infrastructure investments, and a reliable pipeline for critical consumer and industrial goods moving to and from the Islands.

The report's authors analyzed the economic impact of the Jones Act—a law that requires goods transported from U.S. point to U.S. point be transported on vessels that are American crewed, built, and owned—and conducted a thorough market based study to consider the impact of the law to the cost of goods. Moreover, the report analyzed the impact on consumers by evaluating the competitiveness of freight rates in the United States/Hawaii market, the quality of service provided by the Jones Act carriers, and the impact of the carriers’ freight rates, relative to the prices of goods shipped between the U.S. Mainland and Hawaii.

“There has been a lot of contention regarding whether the Jones Act negatively affects Hawaii’s cost of living,” said John Reeve, the principal in Reeve & Associates and the lead economist on the study. “The findings of our study indicate that the Jones Act has no appreciable impact on Hawaii’s cost of living, and that Jones Act carriers provide immense benefits to consumers and business owners, while delivering reliable, high frequency and fast transit services at healthy and competitive rates.”

“Our findings based on various indicators show that higher living costs - partly the premium assigned to the desirability of living in Hawaii - reflect housing costs, not the cost of consumer products relative to the U.S. Mainland,” said Paul Brewbaker, the principal of TZ Economics.

“The findings of this exhaustive study regarding the economic impact of Jones Act-related transportation costs in Hawaii are clear—the Jones Act does not drive up the cost of living in Hawaii. American shipping companies operating under the Jones Act provide an efficient and reliable pipeline for consumer and industrial goods moving to and from the Islands,” said Mike Roberts, president of the trade group American Maritime Partnership. “Waiving the Jones Act would replace American Mariners and ships with foreign ships and mariners, threaten Hawaii’s supply chain, and degrade Hawaii’s and our nation’s security—yet produce no cost of living benefit to Hawaii residents.”

While the study found that while Hawaii does have a high cost of living, that cost is primarily driven by housing expenses and other factors, not the type of consumer goods carried to Hawaii by Jones Act carriers. A market basket study of 200 consumer goods purchased from major retailers such as Costco, Home Depot, Target and Walmart found no significant difference in the price of consumer goods. 142 out of 200 items (71%) were precisely the same in stores in Hawaii as they were in California.

Over a 10 year period, Jones Act carriers’ rates have declined in real terms for essential ocean shipping. The study shows that freight rates in the Mainland-Hawaii trade have declined in real terms when considering the cost of inflation, while benchmarks such as overall U.S. inflation and intercity truckload prices have increased substantially (28%). This freight rate decline is despite a 50% increase in wharfage charges for port/terminal improvements.

The majority of the expenses of moving cargo between the U.S. Mainland and Hawaii are completely unaffected by the Jones Act. The study found that only a third of the total costs of a Jones Act carrier moving freight between the Mainland and Hawaii are affected by the Jones Act (crew and vessel capital costs). If the Jones Act was to be waived for Hawaii, the costs of any foreign-flag vessel operated in that U.S. domestic trade would rise substantially as it would have to comply with U.S. tax, labor, and employee protection laws apart from the Jones Act that would virtually negate any cost advantage provided by foreign registry.

Jones Act carriers are dedicated to Hawaii’s specific needs for high frequency and fast transit to deliver consumer goods to the Hawaiian Islands. Eliminating the Jones Act could undermine priority, frequency and speed.

Jones Act carriers have introduced five new U.S. vessels, as well as three more on the way in the fourth quarter of 2020. According to the study, with these most recent additions, there is more than ample capacity to meet the needs of Hawaii families and businesses. In fact, Jones Act carriers have increased capacity by 22% since 2015 with the addition of new vessels. The level of available capacity in the market naturally drives healthy price competition.

American shipping companies are invested in Hawaii, providing over $2 billion in transportation technology customized for the Hawaii market, such as new ships, terminals and equipment. The Jones Act industry also supports 13,000 jobs for Hawaii families and delivers $787 million in annual workforce income and $3.3 billion economic impact to the local economy.