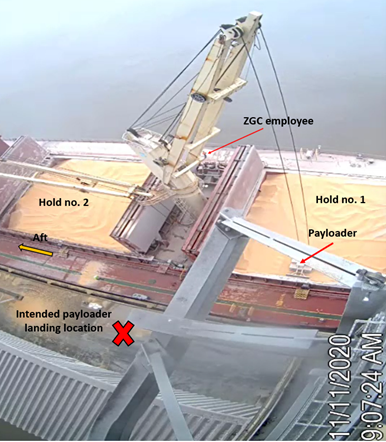 ​​CCTV still image of the GH Storm Cat’s crane during the initial sequence of the accident list—lifting the payloader out of ship’s no. 1 cargo hold. (Photo courtesy of ZGC. Annotated by NTSB.)​

The absence of a dedicated signalman likely led to a bulk carrier’s crane striking a grain facility in Convent, La., in 2020, the National Transportation Safety Board (NTSB) found.

The contact occurred on November 11, while the bulk vessel GH Storm Cat was completing corn loading operations at the Zen-Noh Grain Corporation facility with its number 1 crane boom. The vessel’s crew was removing a payloader from the number 1 cargo hold, which had been filled. A Zen-Noh Grain Corporation employee attached the crane hook to the payloader and then walked out of view of the crane operator. The crane operator, without the assistance of a signalman or spotter, hoisted the payloader out of the cargo hold. While lowering the crane boom to land the payloader on the pier, the boom tip penetrated the shoreside facility runway.

No injuries or pollution were reported. The contact resulted in more than $480,000 worth of damage to the shoreside conveyor gallery.

The NTSB said Tuesday that it determined the probable cause of the contact was the absence of a dedicated signalman, which led to the ship’s crane operator’s misjudgment of the location of the crane boom while lowering the payloader to the pier.

“All ship’s lifts—no matter how routine—should be adequately planned and risk assessed,” the report said. “All personnel involved in the lifting operation should be clearly identified and their duties understood before the start of the lift.”