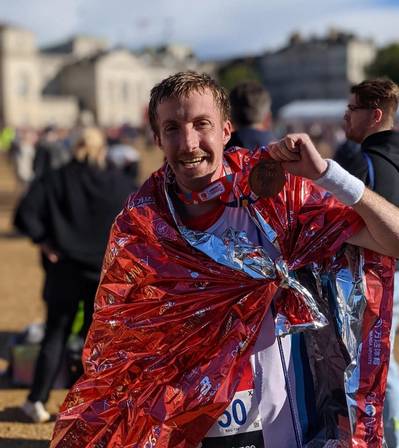 George Belcher, a third engineer who has served as a mariner for more than seven years, took on the 26.2 mile London Marathon on October 3, 2021 to raise awareness of the challenges seafarers are facing due to the pandemic. Photo courtesy Sailor's Society

As the maritime world laments the treatment of seafarers during the COVID pandemic, and the general public generally ignores the call to designate seafarers as "key workers" to help facilitate efficient crew changes globally, one British seafarer recently trained onboard his ship for months to prepare for the London Marathon, a race he recently completed to aid maritime welfare charity, Sailors’ Society.

George Belcher is a third engineer who has served as a mariner for more than seven years. Belcher reportedly took on the 26.2 mile race on October 3, 2021, to raise awareness of the challenges seafarers are facing due to the pandemic, and to raise funds for Sailors’ Society’s global work.

Most of Belcher’s training was done on board ship using a treadmill, with his first running session ashore just six weeks before the race.

“It’s great to be able give something back to a charity that’s helping seafarers get through. The last 18 months, I’ve worked alongside some of the most professional crewmates who have suffered mentally because of the ongoing pandemic or when contracts have been unexpectedly extended. They’ve shown great resilience and determination, carrying on with the job at hand.  By taking part in this event, I wanted to show my appreciation for my colleagues who’ve made massive sacrifices to keep the world running through the pandemic, and to the maritime charities who’ve supported them.”

Many of the world’s estimated 1.6 million seafarers haven’t set foot on dry land for months or have been stuck on board, unable to return home, due to Covid-19 regulations and changing travel restrictions.

George joined six other dedicated Sailors’ Society supporters, including a group from Tindall Riley (Britannia P&I Club), in the run, raising more than $7,000 for the charity to date.

Can the Subsea Factory Support a Net Zero World?