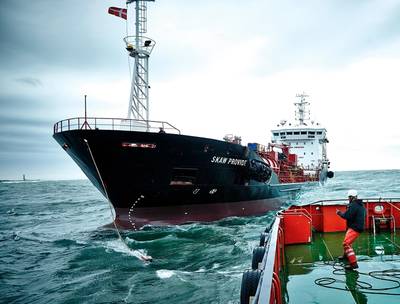 Monjasa expands its reach to Northern France and goes from two to three supply vessels in Northwest Europe. Providing a niche market alternative to the Amsterdam-Rotterdam-Antwerp (ARA) bunker hub has proven relevant for a growing number of customers and volumes are increasing.

Steadily growing demand in the English Channel allows Monjasa to expand its services to cover Northern France as well.

Monjasa is able to cover port areas from Dunkerque, Calais, Dieppe, Le Havre and all the way to Brest. The first bunker stems were completed in Le Havre and Calais last week and were all in the range of 1,400 to 1,750 metric tons.

Monjasa took over oil terminal operations in Portland Port after Aegean in 2015 with the aspirations of building a niche market alternative to the well-established ARA bunker hub.

Monjasa Group COO Svend Mølholt says about taking over oil terminal operations in Portland Port: “Flexibility and short waiting time make the less crowded port areas in the Channel appealingalternatives to taking bunkers in ARA. As an example, we see VLCCs profiting by this solution in connection with short term berthing at oil terminals in Rotterdam, where bunkering is not an option. We are satisfied with the current development considering the continuous challenging shipping markets.”

Because of the English Channel expansion, Monjasa adds the Turkish built 2,700 dwt MT Vinga Safir to the Northwest Europe fleet.

Previously operated by Stena Oil, Vinga Safir is already a well-known vessel in the Skaw area north of Denmark, where she completed her first bunker deliveries for Monjasa on July 2, 2018.