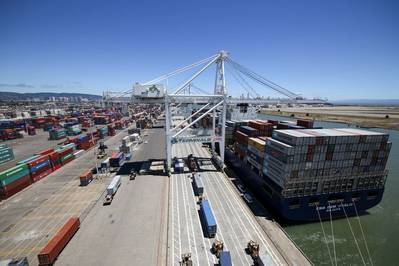 A longshore laborer at the Port of Oakland reportedly fell to his death from the deck of a containership at berth in the early hours on Tuesday.

The International Longshore and Warehouse Union confirmed that the accident victim was one of its members. The port said the fatal accident was under investigation by local authorities.

“This is a tragedy that strikes everyone very deeply,” said Port of Oakland Maritime Director John Driscoll.  “The waterfront is a tightly knit community and if a member of that community succumbs, we all share the grief.”

Workers including longshore labor are on the job despite the shelter-in-place orders issued in the face of a coronavirus crisis as commercial seaports have been designated as critical infrastructure during the crisis.

“All of those on the front-line of the supply chain have our heartfelt gratitude under these trying circumstances,” said Driscoll.  “They’re keeping the economy going and doing their best to maintain some semblance of normalcy for all of us.”

Most marine terminals in Oakland are closed Tuesday for the annual holiday observing the life of late California labor leader Cesar Chavez.