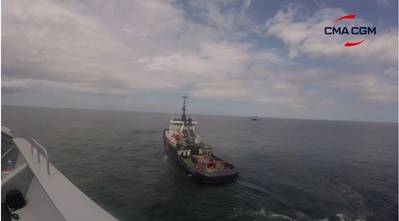 The Maritime Prefecture of the Channel and the North Sea, in liaison with the CMA CGM Group and Les Abeilles (Bourbon Group), organized a towing exercise between a large container ship, the CMA CGM Marco Polo, and the Abeille Languedoc, including an ‘intervention’, ‘assistance’ and ‘rescue tug’ (RIAS), off the coast of Le Havre.

Thus on y, July 21, 2017 from 1:00 pm to 4:40 pm off Le Havre, the CMA CGM MARCO POLO simulated engine damage to enable the crew of L’Abeille Languedoc, the assessment and intervention teams (IEE) and the Maritime Operations Center (COM) of the Maritime Prefecture of the English Channel and the North Sea to train at sea, in real conditions, with a large platform.
The traction and tensioning of the trailer and a progressive rise of the convoy occured, off the coast of Le Havre while a "towing" team from the Maritime Prefecture and the Bees was deployed on board the container ship to ensure an assessment of the practical situation and the good coordination with the crew.
In total, more than 80 people were deployed on the CMA CGM Marco Polo, L’Abeille Languedoc, the Cayman helicopter of the French Navy stationed at Maupertus and the operations center (COM) of Cherbourg.
This exercise was undertaken in a context where the world's maritime traffic remains at a high level of activity (90% of the world's goods are traded by sea) and the trend towards gigantic ships, which began a few years ago, continues.
In the North Sea Channel, France’s northern coast is one of the most frequented maritime areas in the world. Indeed, 20-25% of the world's traffic passes through these seas and about 1,700 container ships, including more than 13,000 "twenty-foot equivalent units"* (TEUs), pass through every year.
In 2016, the trend towards ship gigantism was also found in the cruise sector, with almost 300 reports of steamers over 300 meters present in North Sea Channel, some of which were carrying more than 7,000 people.
For the Port of Le Havre, container port stops above 10,000 TEUs have multiplied by 10 for 10 years and nearly 15% of the cargo ships stopping there are more than 320 meters long.
The Maritime Prefect, as the representative of the State at sea, is responsible for the safeguarding of persons and property, the safety of navigation and the protection of the environment.
Together with all its services and administrations, it does this work and anticipates any emergency response involving one of these giant ships, maintaining an operational condition adapted to the new constraints they impose.
This is marked by an urgent response requiring a lot of reactivity in a small maritime space, which is dense in terms of activities and marked by difficult natural characteristics: 150 days per year of dangerous sea conditions (special weather bulletins with winds equal to or greater than 7 Beaufort), a sea temperature between 7-10°C from October to March, 40 to 50 days of fog per year, currents among the strongest in the world, and shoals.
In 2016, 21 maritime events that could have led to serious or major accidents were managed in the North Sea Channel by the Maritime Prefecture and the administrations under its responsibility.
The CMA CGM Marco Polo is a ship built in 2012, which belongs to the CMA CGM Group.
It measures 396 meters long by 53.6 meters wide, its draft is 16 meters and its capacity is 16,020 TEUs. The CMA CGM Group, founded by Jacques R. Saadé, is a world leader in maritime transport. Its 445 vessels serve more than 420 ports in the world, on 5 continents. In 2016, they transported 15.6 million TEU containers.
• CMA CGM Group • English Channel • France