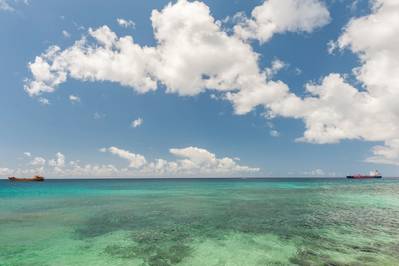 Venezuela's state-run PDVSA suspended oil storage and shipping from its Caribbean facilities following a move by ConocoPhillips to temporarily seize the firm's assets on four islands, according to a PDVSA source and Reuters data.

PDVSA has begun concentrating most shipping in its main crude terminal of Jose on Venezuela's eastern coast and recalling tankers to Venezuelan waters to avoid seizures that would further cut its exports and worsen an economy on the verge of collapse.

U.S.-based Conoco is attaching PDVSA's overseas assets to enforce a $2 billion arbitration award in April on the nationalization of the U.S. firm's projects in Venezuela in 2007.

"We are no longer storing or shipping oil from the Caribbean islands. We are now mostly depending on Jose," the PDVSA source said.

Dutch authorities, which have oversight on the islands, declined to comment, calling it a matter between two private companies.

PDVSA last year shipped over 400,000 barrels per day (bpd) of crude and refined products from five owned and leased facilities in Aruba, Bonaire, Curacao and St Eustatius, according to internal data from the company. The terminals handled around 24 percent of its total exports.

Crowded Ports
Conoco has attached at least 4.8 million barrels of PDVSA's stored crude and fuel oil in the islands of Bonaire and St. Eustatius, according to shippers and the PDVSA source, a fraction of the 53 million barrel total capacity of the terminals.

A Conoco spokesman declined to comment on Tuesday. Earlier this week, the U.S. company said it would continue to pursue PDVSA's assets while trying to enforce the arbitration award.

In Venezuela, cargoes arriving from the Caribbean have begun creating bottlenecks of vessels around Jose and the docks that serve PDVSA's biggest refinery, the Paraguana Refining Center (CRP), according to the data.

As Jose and the CRP receive a larger number of tankers, Venezuela's ports of Bajo Grande and Puerto Miranda, which ship most of the country's Western region crudes, have been operating under restrictions since last year due to frequent leaks that affect vessels docking there.

Oil leaks, lack of money for importing spare parts and a growing brain drain are affecting Venezuela's oil ports, refineries and oilfields. The OPEC-member country's crude exports fell 29 percent versus the same period of 2017 to 1.19 million bpd in the first quarter, according to Reuters data.

On Monday night, PDVSA ordered the Aframax tanker British Cygnet, which was waiting to discharge in Curacao, to divert to Venezuelan waters, according to a shipper and Reuters data.

The vessel had loaded crude at Russia's Primorsk terminal last month and arrived in Curacao's Bullenbay terminal on Sunday, two days after at least two Caribbean courts ordered the retention of PDVSA's inventories and facilities in Bonaire, Curacao, Aruba and St. Eustatius by request of Conoco.

PDVSA has been buying U.S. and Russian crudes this year for refining at its 335,000 barrel-per-day Isla refinery in Curacao and for blending with extra-heavy oil from the Orinoco Belt, Venezuela's main producing region.

The British Cygnet follows at least nine vessels diverted since Friday from Curacao and Bonaire to Venezuela and Cuba to avoid possible seizures of tankers or their barrels, according to the PDVSA source and Reuters data.