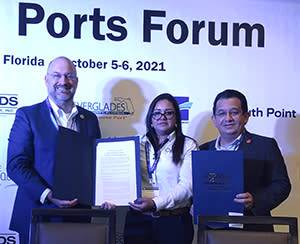 "International trade promotion is a priority for Port Everglades and Broward County. Increased trade will lead to the creation of more jobs both in Florida and the Central American region," Daniels said. "Honduras is an important trade partner for Port Everglades and the nation. South Florida, as a region, far exceeds other US areas in trade between the United States and Honduras - including all the nation's seaports, airports, and border crossings."

"The expansion of the Honduras National Port Authority's 'organic law'* gives us now the facilities to promote and create Dry Port Projects, which will amplify and expand our seaports with areas of strong economic development of different countries inside Honduras territory; thus creating ample feeder port capacities and focusing Honduras' strategic geographical location to the principal East and West coast market of the USA, anchoring and expanding  stronger roots of Europe and Asia to America," said Gerardo Murillo, General Manager ENP for the National Port Authority of Honduras.

The two parties want to establish joint initiatives aimed at facilitating international trade and generating new business by promoting the sea trade routes between the two countries. The MOU outlines joint initiatives, including marketing activities and market studies, data sharing, training, and sharing of information on technology, modernization and improvements.

For Fiscal Year-to-Date 2021 (Sept. 30, 2020 - Oct. 1, 2021) nearly 75,000 TEUs (the standard maritime measurement of 20-foot equivalent units) have moved between the two ports. On the export side, cargo consists of textiles for assembly, automobiles and parts, electronics and yarn. The dominant imports from Honduras include perishables, such as fruits and vegetables, as well as assembled t-shirts, underwear and socks.