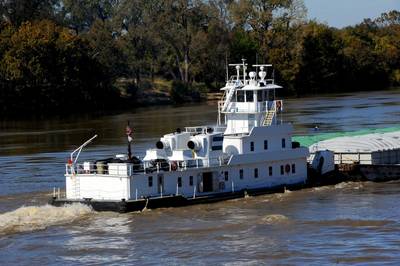 Grappling with slowed business levels caused by the ongoing pandemic, Arkansas' Port of Little Rock reports September was its best month since April of this year.

Activity levels at the port's docks increased with 29 barges worked; 21 at the slackwater dock and eight at the river dock. More than 44,000 net tons of cargo was handled including the following commodities: aluminum ingots, sows, and tee bars; nepheline syenite, scrap, steel coils, wetcake and wire rod coils.

“2020 has been a challenging year, but we are optimistic that activity levels will resume to near normal levels in the first quarter of 2021,” said Bryan Day, executive director of the Little Rock Port Authority. “September showed a significant improvement in the level of activity at the port, a hopeful sign that the economy may be improving.”

Rail operations at the port improved with Hormel, Delta and Prospect posting strong car counts for the month with Novus, LSI and Ring remaining consistent in numbers. NLR received an ethanol train in September which increased the total car count. Welspun received 62 inbound loads of coil during last month. Looking forward, Welspun has additional projects that will ship on both Union Pacific and Burlington Northern using 1,400 cars moving in unit trains and manifest shipments later this year.

The port said rail car storage continues to be a positive revenue generator, with 235 cars currently in storage.