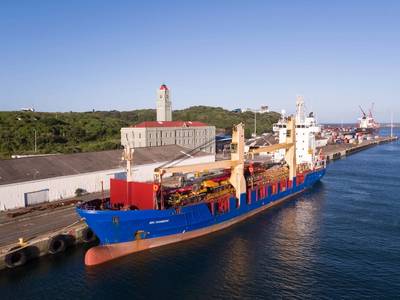 Collaboration between the Ports of East London and Ngqura, together with the South African Maritime Safety Authority (SAMSA), helped avert another potential maritime disaster in the Eastern Cape during the past week.

Transnet National Ports Authority (TNPA) towed the BBC Shanghai, a 101 meter long general cargo vessel with 11 crew members on board, safely into the Port of East London on Friday, March 17, after she suffered engine failure en route from Durban to Lagos.
One of TNPA’s new tugs – Shasa – which has a bollard pull of 70 metric tons, sailed from East London with a crew of 10 on Thursday to assist in towing the stricken vessel, which was drifting 35 km off Mazeppa Bay on the Wild Coast.
SHASA is usually based at the Port of Ngqura and was due to sail back on Friday morning following her annual maintenance lay-up in the East London dry dock. However she was rerouted to tow BBC Shanghai to East London.
Two other East London tugs, Impunzi and Umthwalume, both with a 43 ton bollard pull, and the pilot boat, Tristan Tern, with an 18 ton bollard pull, helped guide the stricken vessel safely into port.
BBC Shanghai will undergo repairs in East London before continuing her voyage.
“The salvage of this vessel is testament to the capability of our marine operations, both in terms of the fleet and the skill of our teams who worked together seamlessly with all role players,” explained East London Port Manager, Jacqueline Brown. “Well done to TNPA Tug Master, Siegfried Duwe, and his crew for successfully completing the towing of the BBC Shanghai cargo vessel and to all those involved in the operation.”
This is the second incident in less than five weeks where TNPA, in collaboration with SAMSA and other bodies, has salvaged vessels.
In mid-February a joint effort undertaken by a comprehensive Disaster Management team at the Port of Ngqura, saved the APL Austria and minimized the environmental impact, after the container vessel caught fire 30 nautical miles South-west of Cape St Francis. She was towed into the Port of Nqura where the fire was extinguished.
“The newer more powerful tugs, such as the Shasa, are proving their worth. The tugs have Voith Schneider propulsion which makes them highly maneuverable and able to change direction and thrust almost instantaneously while guiding large vessels safely into port.
“During the recovery of the APL Austria they were instrumental in controlling the fire by blanket spraying the vessel and providing boundary cooling to containers at anchorage as the vessel docked,” added Ngqura Port Manager, Mpumi Dweba-Kwetana.
TNPA also has a R1.4 billion tug building contract underway in Durban to build nine new tugs, five of which have already been delivered. The new fleet boasts 31 meter long tugs with a 70 ton bollard pull. They also feature Voith Schneider propulsion.
• Austria • Eastern Cape • Port of Ngqura

US LNG Exports at 20-month Low