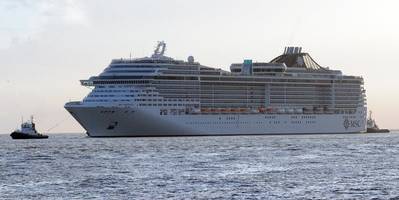 Built from the STX yard in Saint-Nazaire, France, MSC Preziosa is the latest ship in MSC’s Fantasia-class and the 12th in the MSC fleet. The vessel has recently completed a series of sea trials including propulsion and maneuverability (speed ranges, full speed, crash stop, power plant and propulsion interactions, full/partial propulsion configurations) as well as noise and vibration measurements.

Briag Allain, propulsion technical function manager at STX Europe says, “This is the first time we participated in sea trials with such a high level of performance without any trips or incidents of the propulsion system and this is because of the product reliability, and also, GE Power Conversion has really gained the trust of STX Europe through their commitment to their customers.”

The new ship will have an ‘A’ Shipping Efficiency ranking, the same as its sister ship, MSC Divina.

Maersk to Ship Cargo Between UAE and Israel