Qatar to Invest USD 20 bln in US Energy Sector 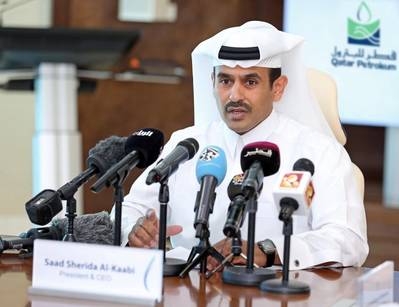 Peninsular Arab country Qatar has said that it plans to invest more than $20 billion in the US energy sector over the next five years.

According to a report in Reuters, minister of state for energy affairs of the energy-rich Qatar Saad Sherida Al-Kaabi, who is also the  President & CEO of Qatar Petroleum, said he is looking to invest in US oil and gas sectors as well as unconventional resources.

The report quoted Saad as saying: “North of USD20 billion will be invested over the next five years in the United States in different projects.”

A prime target of Qatar  was to revive the multi-billion dollar Golden Pass LNG (liquified natural gas) terminal in Texas, he said.

"We are contemplating moving (the project)forward with our partners," said Kaabi, saying a final decision would be made shortly. Qatar Petroleum owns 70 percent of the project, with ExxonMobil and ConocoPhillips splitting the rest.

Qatar, a tiny but wealthy country is one of the most influential players in the LNG market due to its annual production of 77 million tonnes. It plans to boost capacity 43 percent by 2023-2024 and will be building four liquefaction trains for the LNG expansion.

Freight Planning… What About Offshore Wind…?