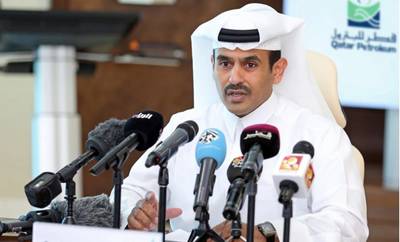 The integration of RasGas with Qatargas will enable the world’s largest LNG exporter to save QR2bn ($550 million) a year, Qatar Petroleum (QP), the state-owned energy giant, announced.

Saad Sherida Al-Kaabi, President & CEO of Qatar Petroleum made the announcement in a press conference held at QP headquarters in the presence of representatives of ExxonMobil, Total, ConocoPhillips, and Shell - the main international shareholders in both companies.
Al-Kaabi said “Our aim was to integrate the two companies’ resources and capabilities to create a truly unique global energy operator in terms of size, service and reliability. We also aimed to create higher value for our stakeholders, and enhance the competitive position of the Qatari gas industry.
“It is important to highlight that this integration will ultimately save us around 2 billion Qatari Riyals in operating cost annually,” he added.
During the press conference, Qatar Petroleum’s President & CEO announced the birth of the new Qatargas saying: “As of the first of January 2018, all the ventures that were operated by Qatargas and RasGas are now operated by the new ‘Qatargas’, which is the result of the integration of two great energy centers of excellence.”
“Today, I am pleased to announce that we have accomplished our objective with great success, and on time. Qatargas will be the single entity exporting Qatari LNG to the world, under a ONE shared vision, ONE management system, and ONE work culture. It also gives me great pleasure to announce the appointment of the current Qatargas CEO Sheikh Khalid Bin Khalifa Al Thani as the CEO for the new Qatargas,” He added.
At the conclusion of his remarks, Saad Sherida Al-Kaabi extended sincere thanks and appreciation to all the buyers of Qatari gas around the world for their trust and confidence in Qatar Petroleum and in the State of Qatar, assuring them that Qatar will do its utmost to ensure the continued safe and reliable LNG delivery to their friendly countries.
He also took the opportunity to thank all management teams from Qatar Petroleum, its international partners, Qatargas, and RasGas, for their contributions in creation of the new Qatargas.
The integration process will continue to focus on providing enhanced service, reliability, efficiency and effectiveness, as well as strengthening operations groups, which remained unimpacted by the integration, as the highest priority was given to ensuring a safe, seamless and risk-free business continuity.​
• ConocoPhillips • ExxonMobil • gas industry

Freight Planning… What About Offshore Wind…?