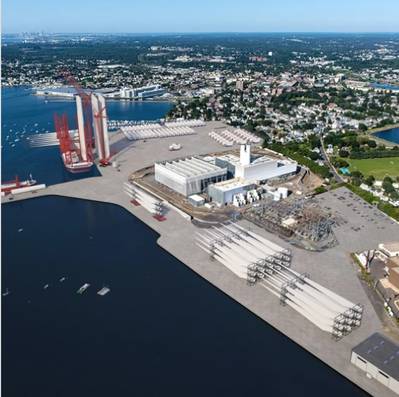 Vineyard Wind, set to be the first ever commercial scale offshore wind farm in the U.S., will work with Crowley Maritime Corporation and the City of Salem for the project.

The agreement, part of the “Commonwealth Wind” proposal, is contingent upon the company winning an award by the State of Massachusetts, which is currently evaluating offshore wind procurement bids.

Earlier this month, Vineyard Wind said it closed on a $2.3 billion loan enabling work to begin onshore in Massachusetts later this year, with offshore construction to start in 2022.

“As offshore wind continues to expand, new purpose-built ports will be key to the success of this industry. By constructing the nation’s first purpose-built offshore wind port in New Bedford, Massachusetts has been leading the way. With a new offshore wind port in Salem, the Commonwealth can ensure that it is ready to face the demands of a rapidly growing industry,” said Lars T. Pedersen, CEO of Vineyard Wind, a joint venture between Avangrid Renewables, a subsidiary of AVANGRID, Inc. (NYSE: AGR), and Copenhagen Infrastructure Partners (CIP).

Vineyard Wind estimates that the project would create up to an estimated 400 full time equivalent (FTE) job years during the revitalization of the port and up to another 500 FTEs over the first five years of operation for construction and staging for wind projects and day-to-day port operations, for a total of 900 FTE job years.

“With both New Bedford and Salem capable of delivering port operations needed for offshore wind, the state can ensure that both the South Coast and the North Shore can benefit from the creation of new, highly skilled and good paying jobs, something that will cement Massachusetts’ position as a leader in the new and growing offshore wind industry,” Pedersen said.

“This partnership is a great example of how sites that once supported coal can be transformed into sustainable infrastructure to support the vital clean energy transition,” said Bill White, head of offshore wind for Avangrid Renewables. “Commonwealth Wind is a transformational project that will create good jobs, economic opportunity and clean electricity for Massachusetts, facilitated by this important partnership with the City of Salem and Crowley.”

Under the terms of the proposed agreement, Crowley, through its New Energy subsidiary Crowley Wind Services, will purchase the 42 acres surrounding Salem Harbor Station, currently owned by Footprint Power LLC, and will serve as the long-term offshore wind port operator for the site. Vineyard Wind’s partners (Avangrid Renewables & CIP) will serve as the port’s anchor tenants, utilizing the property for the Commonwealth Wind project as well as other projects in the company’s portfolio. Following the redevelopment of Salem Harbor, Avangrid Renewables will be the first tenant to utilize the site to assemble and deploy offshore wind turbines for Commonwealth Wind and future projects. Copenhagen Infrastructure Partners will be the second tenant to utilize the Terminal to assemble and deploy turbines for their future projects.

“This partnership reinforces Crowley’s position as a total lifecycle service provider in the offshore wind sector,” said Vice President Jeff Andreini of Crowley New Energy. “We look forward to working with Vineyard Wind and the City of Salem and providing the highest level of service in order to make Salem Harbor a leading provider in the offshore wind supply chain.”

The Commonwealth Wind project intends to use the site for turbine assembly and staging activities, utilizing the site to store and assemble components – including blades, nacelles, and tower sections – as they are prepared for offshore installation. Given Salem Harbor’s deep-water port and unrestricted height access to accommodate large-scale wind turbine installation vessels, Vineyard Wind sees Salem Harbor as a necessary addition to support the offshore wind industry within the Commonwealth and across the region.

Both Vineyard Wind and Crowley will work alongside the City of Salem to engage in a community outreach and listening process to seek input and build support for this innovative partnership. The parties are committed to jointly developing a local community benefit agreement to safeguard the City’s long-term interests, while working with residents and businesses to identify local supply chain and workforce development opportunities.

Mayor Kimberley Driscoll. “For centuries, when Salem looked toward its future, it looked toward the sea. This site, in particular, has provided the electricity that has powered our community and our Commonwealth for generations. Today, with this announcement, that legacy can continue with a new focus on a clean energy future, based on renewable power and with a shared commitment to positive action to mitigate climate change. In addition, this project would provide a significant expansion to our commercial tax base and create hundreds of clean energy jobs, right here in Salem.”

“This is a critical opportunity for Salem to join offshore wind production in the Commonwealth,” said State Senator Joan Lovely. “Salem Harbor’s deep-port provides an ideal site for offshore wind production and supports regional and statewide efforts to establish reliable renewable energy resources to combat climate change. The partnership between Salem, Vineyard Wind and Crowley Maritime will boost our state’s economy while preserving the long-term interests of our community.”

“This proposal represents an exciting and generational opportunity in getting us on the road to renewable clean energy,” said State Representative Paul Tucker. “The transformation of this site from a coal fired plant to a major clean energy producer is nothing short of extraordinary.”