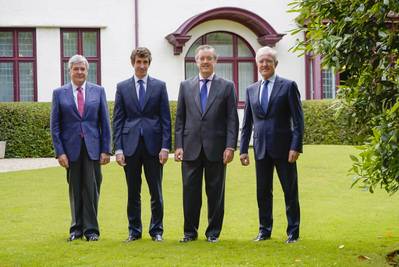 SENER Group announced it has appointed a new president and new CEO to usher in a new leadership phase at the Spanish-based engineering company. Andrés Sendagorta has been named President of the SENER Group, and Jorge Sendagorta Cudós its new CEO.

Sendagorta, hitherto Vice President of SENER, takes over from Jorge Sendagorta, who will continue to be linked to the SENER Group as its Honorary President.

Andrés Sendagorta holds a diploma in General Management from the Institute for Higher Business Studies IESE (Universidad de Navarra, Spain). He is a member of the Steering Committee of Instituto de Estudios Bursátiles (the Institute for Stock Market Studies), and the President of the Basque Family Business Association AEFAME. Lieutenant Commander and Harrier jet pilot on board aircraft carriers (U.S. Navy and Spanish Navy). In 2009, he was awarded the Grand Cross of Naval Merit with white decoration by King Juan Carlos I. Andrés Sendagorta's professional relationship with SENER was forged, first, as a Director (at the Board of Directors) and ten years later, since 2000, as Vicepresident of the Group. In 2018, he was appointed President of the SENER Foundation.

After spending time with FCC and General Electric, he began his career at SENER in 2012 as Project Manager in the Energy area. In 2015, he was appointed Country Manager of SENER in Mexico, the main office of the SENER Group outside Spain with over 350 professionals.