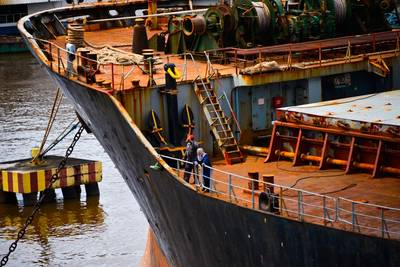 Ships must be allowed to change over overworked and exhausted crews to help to keep trade flowing as coronavirus lockdowns shut many transit points across the globe, shipping industry officials said on Tuesday.

About 90% of world trade is transported by sea but a deepening lockdown in many countries and suspended air travel have disrupted supply chains, especially for ship owners who rely on the free movement of crews to keep ships moving.

The International Chamber of Shipping association (ICS), and the International Transport Workers’ Federation (ITF), said in a letter to the Group of 20 major economies, that there were 1.2 million merchant sailors out at sea at any point, with 100,000 crew members needing to be rotated each month.

Both bodies called for co-operation between UN agencies, governments and airlines to enable the changeover of ships’ crews as soon as it was feasible.

"The issue of crew changes has the potential to become a massive problem for the global economy if governments do not address our concerns," said Guy Platten, ICS secretary general, which represents more than 80% of the world's merchant fleet.

In March, G20 energy ministers made a commitment to ensure continued operation of logistics networks that form the backbone of global supply chains, without undermining efforts to prevent the spread of the coronavirus.

The G20 energy ministers will hold a video conference on Friday hosted by Saudi Arabia, an internal document seen by Reuters showed.

Stephen Cotton, ITF general secretary, said the federation and the ICS had grave concerns for the tens of thousands of crew members whose duty on board ships had ended, but were forced to remain at sea for additional months.

"The current deadlock not only threatens seafarers’ personal health and wellbeing, but also increases the risk of marine accidents," Cotton added in a statement.

DNV GL's Ørbeck-Nilssen: Maritime 'Renaissance' Could be on the Horizon